The Table of Doom

We'll pretend that this isn't something that I have struggled with for my entire adult life and just say that it started in April of 2011.  As you can see from this post, at the end of April last two years ago, I got lots of tidying up done and was left with what should have been two fairly manageable piles of sorting and filing left to do.  And then stuff starting piling up again, various things happened, I fell into a serious black hole of depression, which I am only properly emerging from in the last few months and, although I have made a few efforts and tackled quite a bit of stuff, I never seem to quite manage to get it all done.  I've done some rearranging of furniture in the meantime as well so that now I have a table where the yellow couch was (the yellow couch is now where the red one was, the red couch in now my bed and the day bed I mentioned using as my bed then is in four pieces, waiting to be brought down to the cellar, with the mattress stored behind the yellow couch and covered with a nice throw. Just in case you were wondering.)  So the piles of stuff are now on the table and, even if they're not exactly the same piles of stuff as there were two years ago, some of the stuff is definitely the same and enough is enough. 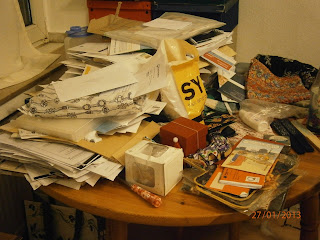 Knowing that I don't have the energy or sheer willpower to just sit down and get all of this done in one go, I decided instead to tackle it a little bit at a time.  So far this week, this has been working well and I'm going to keep it up until it's all done.  I don't care if it takes me four weeks to get this done.  It has essentially been waiting for two years for me to get around to it so four weeks really isn't such a big deal.  Since it's the start of a four-week month it feels like a good timeframe to aim for as well.

So I'm doing a variation of the five-a-day that is so important.  Normally that refers to the minimum number of servings of fruit or veg you should eat to stay healthy.  For now though, five-a-day is the minimum number of things that I am clearing from my Table of Doom each day.  I am also, however, limiting it to a maximum of one handful.  If I start to get stuck into it for a couple of hours there is a danger that I won't be able to hold out till it's finished and will end up just leaving it reduced but still unfinished.  Again.

I've gotten through a fair bit already and so far the small amounts do seem to be helping me to keep it up.  It's just what I needed, I think.  I need to think of it as long-distance rather than a sprint and just slowly keep plodding through it.  It's stamina, not so much as speed that I need to get it done.

This is by no means the only disaster area in my house but it's one that will make the biggest difference.  Just having the space to lay the table properly and sit down to eat, being able to feel free to invite people over, not always using my laptop set up on a chair in front of the couch...these are things that will greatly improve my quality of life.  This is as far as this slow and steady pace has gotten me this week: 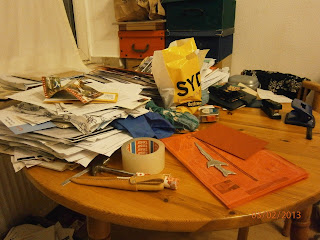 Moving most of the non-paper larger bits and pieces at the front made a big difference but I've left the plastic bag there as a visual clue to remind me that the piles of paper, although still intimidating, are definitely going down.  A small pile of stuff has moved onto the windowsill but that's some envelopes and other plastic covers and things that can be re-used.  The drawers they go into are behind the table so until it's cleared, I can't put them away.
Posted by Moonwaves at Sunday, February 03, 2013

I can so relate to this! I had a "Desk of Doom" that was almost identical, but probably worse!

I tackled it by buying about 15 A4 ring binders, each with 10-tab dividers.

I was able to file a lot of things in the binders and store them in a bookcase. It has helped my life so much; I can now find important papers when I need them.

Whichever way you do it, good luck! Keep at it with the 5-a-day!