Liz from Pocket Farm has once again decided to host One Local Summer and I've signed up this year. I found the Pocket Farm blog just as it was coming to the end of the OLS challenge last year and thought it was a great idea so was glad to be able to sign up for it this year. The idea is that once a week you cook a meal which is local and then blog about it (and also post in a flickr group - have to figure that one out at the weekend). The first week began last Sunday but as I was away at the weekend and have been erratic at buying and preparing food over the last couple of months I wasn't quite prepared. Still, I'm hoping it'll help to focus my mind again and to get me back in the kitchen cooking proper food again.

So, not wanting the week to run away with me I spent all day Monday trying to figure out what to cook (additionally challenged this week as I don't get paid till Friday and am very, very broke and had basically been planning on living on pasta and porridge all week). Then I remembered that I had some beef pieces in the freezer which had been intended for a dinner which ended up being cancelled a few weeks ago. I also still had a few potatoes left from my visit to Ranelagh market two weeks ago. Stew it was and with the weather the way it is at the moment it didn't feel at all strange to be eating this wintry comfort food at all! 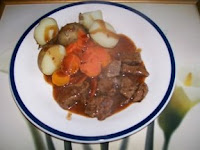 I browned the beef pieces in a little bit of sunflower oil, then added some boiled water, salt and pepper, a dash of worchestershire sauce and some bisto. Meanwhile I boiled the potatoes and a couple of carrots I also found in fridge. As I had been delayed in work yesterday and the traffic was appalling to boot I ended up cooking this much quicker than I wanted to but it still tasted great. And I was particularly proud that I did it even after the day I'd had and even though it was already half-eight by the time I started cooking.

Ingredients:
Beef pieces from Coolanowle Farm (according to the AA routeplanner about 57 miles from me)
Potatoes from the Berry Farm, Kiltiernan (about 10 miles from me)
Carrots had been in the fridge for a while but I think they are from McNally's Farm in Naul (which is in north Co. Dublin about 24 miles from me)

Salt, pepper, worchestershire sauce and bisto powder were from the cupboard. Worchestershire sauce and bisto made in England. Salt is, I think, French - the only unrefined salt available. No idea where the peppercorns came from as I bought a huge bag from an oriental shop a few months ago and just have them stored in an airtight container. The sunflower oil was the last dribble from a Lidl bottle purchased last year.

So, a delicious meal, everything for it was already there in my kitchen and it reminded me that the most important ingredient in any meal is a bit of enthusiasm (and lack of laziness!). If I hadn't been participating in this challenge I would have had a very boring dinner - in fact I reminded myself of the moany kid I heard on a reality TV show once complaining that there was no food in the house, only ingredients! And the best part is I had more than enough for three servings so that's lunch sorted for a couple of days too!

I'll post my general guidelines for the OLS challenge soon. Basically I will be aiming for one entirely local meal a week with some exceptions such as oil/condiments/spices.
Posted by Moonwaves at Wednesday, June 27, 2007 3 comments: Links to this post

How does your garden grow?

To be honest, not too well at the moment. Today it feels like we're back in winter again with a horrible gray day and pouring rain. It's supposed to clear up later but then more of the same for the rest of the week, some respite on Friday and even more rain on Saturday and Sunday. Dontcha just love the summer!

I still haven't managed to grow any lettuce of any kinds or spinach. My scallions are tiny but at least still doing something. All of my courgettes seem to have been infested with aphids. I've rubbed off as many as I could and sprayed a couple of times with soapy water so hopefully that might work. Unfortunately it seems to keep raining not long after doing that so I don't know if the rain is just washing the soapy water away (wouldn't wash the bloody aphids away though would it!?!). My potatoe plants are growing away at a furious pace and I ended up having to go and buy some topsoil to earth them up a bit more - at this rate they're going to be the most expensive potatoes I've ever eaten but at least I'll get to use the soil again for something else. Unless they get blight which everyone seems to keep telling me I'll get since the weather is so wet now. No wonder I'm having a less-than-positive outlook day. They seem fine so I'm not going to worry about blight until/unless it happens. Of course, the plants are growing away wonderfully but I don't actually know if there are any potatoes under the ground. Root vegetables are a bit frustrating like that I think - you can only assume that if the bit on top is growing well then the bit belowground is as well.

I haven't managed to get any more tomato seedlings past the two leaf stage but was able to buy two plants yesterday at the market (didn't buy much else as almost everything seemed to be from South America or have no sign up showing the origin - drives me mad! I asked them where the onions were from and they said "assume they're Irish" - why would they assume that when almost nothing else was! Grrrr!). I try to avoid buying fruit or veg from Denis Healy who is a big wholesaler of organic stuff (is also supposed to have a farm in Wexford but I'm not sure it's terribly big) who has a presence, often the only one, at most farmers' markets and certainly all of the Dublin ones! I need to get my act together to get into Temple Bar Market early on Saturday mornings to buy from MacNally's Farm, one of the few (if not only) stalls run by the actual farmer who has grown everything being sold. She also makes lovely chutney, relishes and jams.

I did buy a big bin with a secure clip-on lid this weekend and pulled up as many weeds as I could easily get to (mostly dock I think but there are plenty of dandelions waiting for me to get to them in the front garden), put them into the bin with lots of water and will just wait now for it to turn into wonderful (but smelly) weed tea which I can dilute to use for fertilising. In the meantime I bought some liquid seaweed feed to try and encourage my courgettes and tomatoes along a bit more.

No other gardening news really. It's solstice this week and for once I've remembered it before it happens so I may plan something nice for that evening after work. I've been thinking about getting up to watch the sun rise but then I looked it up and that'll be about half-four in the morning, which would mean getting up before four to drive up the mountains - if you're going to watch a sunrise might as well go for the best view. I still might do it but it will depend a bit on the weather as well. I'm not sure I'll be too tempted to drag myself out if it's raining like it is today. But on the other hand we should appreciate nature in all her guises. But on the other hand - dark, cold and wet won't necessarily make for the best way to start the day. But on the other hand...will have to wait and see on this one.
Posted by Moonwaves at Monday, June 18, 2007 4 comments: Links to this post