I did open my sealed pot last year but if I recall correctly, I just took about twenty-five euro out of it and put the rest back in. I've had another year of mostly forgetting about it, to be honest, but I opened it up and counted it yesterday. I had even added a couple of notes at some stage. Total: €83.06. Not bad really. I'm heading to the craft fair at the RDS in Dublin in a couple of days and will be keeping an eye out for something beautiful that I otherwise wouldn't get for myself. I'm not in debt anymore but the trapped feeling does resurface from time to time. It's nice to have an amount set aside that can be just spent without agonising over whether it would be the better to save it or use it for something practical. 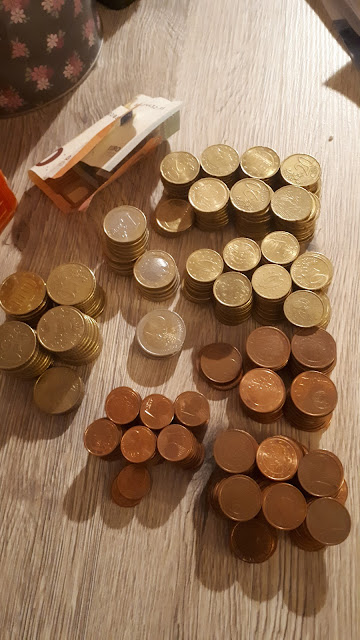 Posted by Moonwaves at Tuesday, December 04, 2018 No comments:

After living with a 60cmx90cm table that I bought second-hand for £6 (yes, pounds, that'll give you an idea of how old it is - I think it must have been late 1999) as my only table for the last two and a half years, I finally had some money that wasn't desperately needed elsewhere and spent some time driving myself mad looking at hundreds of tables to find one I liked. After a disappointing time at Ikea a few months after moving here, I had kind of put the whole thing on hold. Starting to search again in the last few months, there were a lot that I did like but unfortunately they mostly seemed to come with pricetags in the several thousands of euro range, which was just a bit more than I had available.  However, I finally did see something that was a little bit unusual and a good price and after taking a photo and thinking about it for a couple of weeks, I went for it. After waiting and waiting (and spending some time looking for a rug, but that's an even more difficult thing to choose than a table!) it was finally delivered on Friday. I paid the extra for delivery and assembly but got a deal on a combined cost for those two because I'd been having a nice chat with the woman who was serving me. And she had a lovely holiday in Ireland once.

It did actually come with those little felt things to put on the legs so I'm not too bothered anymore about not having found a rug on time. I think I will get one eventually though, as the colour of the table really doesn't go with the floor. Glad I didn't think of that though because I do like this table, even if it is nothing at all like I would have described if you had asked me what I was looking for. Given that I will probably not live in this apartment for the rest of my life, it's no harm to not have chosen a table just to match or complement the floor here.

It's not quite right in that position and I have since moved it around to face the other way. However, that means that it's pushed up against the dresser (which I still haven't gotten around to painting red). I'll have to do some furniture tetris soon but for now, it's fine. I hurt my back somehow a week or so ago and am not supposed to be doing any heavy lifting for at least one more week. I think I'll end up moving the couch back around to fit under the window (this was when I moved it from that position, and this is from when it was there before - still need to get rid of that chair but hoping my sister will take it), move the dresser to the wall opposite where it is now and the tallboy that's currently there down close to the couch on the other side (just about where the wooden chair is).

I currently have three chairs and one of them doesn't match the table at all either. The other two are black (I've just bought another one of the black one you can see on the right-hand side of the picture above) so while they don't really match, they don't really clash either. I'll have to have a think about that at a later date. For now, I have those three chairs and also have three stools, which is more than enough if I decide to invite people over. The table is 160cm long but can expand out to 210cm - so it's a teensy bit bigger than what I had decided was my maximum of 150cm but what can I say? I just really like it and am so happy to have a proper sized table again.
Posted by Moonwaves at Sunday, December 02, 2018 No comments: