Curry in a hurry

Thanks to MFin3's fantastic curry in a hurry paste and a small amount of prep work at the weekend, I had time before work this morning to yhrow a curry together in just a few minutes. Well, maybe twenty-five minutes but that includes ironing a shirt and washing and dressing myself, since multi-tasking is the order of the day.

I hadn't prepped the chard and beet specifically for this, just to have them cooked before they went off. I also bought some beef pieces that I didn't want to go off so browning those to maybe use tonight gave me just enough time to remember the curry paste and I sprang into action. Chopped an onion and half a kohlrabi and sauteed quickly. Added chopped (boiled) beet and chopped (sauteed) chard. Then the beef.

Defrosted three wedges of curry paste in the pan I had browned the beef in and then used juice from a jar of tomatoes to deglaze the whole lot and that, along with the tomatoes, went into the pot. Boiled it hard for ten minutes and have left it wrapped up in a blanket. Interested to see what it'll be like when I get hone at lunchtime, which for once I can do today. 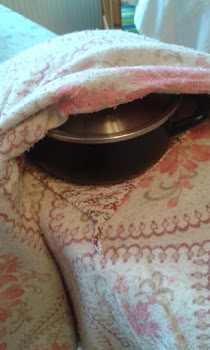 Posted by Moonwaves at Tuesday, October 20, 2015 No comments:

It's a bank holiday so shops are closed and it has been a lovely quiet day on my otherwise busy road. I have a ton to do but ended up having another mega stressful day in work yesterday (only four weeks left thankfully) and then staying up until after one watching and reading stuff on the internet. You know, waiting until midnight and then deciding it'd be a good idea to start looking into the details of what exactly an invoice has to contain and that kind of thing. So my day started off with me waking at half-nine and stumbling to the bathroom before deciding to go back to bed and lie down while deciding what to do with the day, since my original plan of going into work just really wasn't enticing me. Before I could even think about it, though, I'd fallen asleep and didn't wake up until half-one. Well okay so. That's as good a plan as any.

I got up and made some toast and then went back to bed and spent a couple of hours reading newspaper articles online and watching the Late Late Show, Ireland's Friday night chat-show. There's a documentary on Panti Bliss coming out soon (The Queen of Ireland, trailer here; see here for the amazing speech Panti gave in the run-up to the marriage referendum in Ireland - I'm about as lefty liberal as they come but that speech certainly gave me a lot to think about) and Rory O'Neill was on the Late Late talking about it, along with his parents. I also caught the interview with Professor Green (had no idea who that was (singer/rap artist, in case you're similarly tuned out)) but it was a very interesting interview, particulary as I met someone this year who suffers from Generalised Anxiety Disorder, not to mention that he is also a person who was "left behind" after a suicide.  After all that I caught up on twitter and instagram and then got up again for another couple of slices of toast.

While the bread was toasting I put a wash on, did the washing up from last night and decided that I'd move from the bed to the couch for a few hours. So here I have been sitting for the last three hours or so. Following the rugby online, texting briefly with my sister, texting a bit less briefly with a very wonderful man who I am so grateful to have as a friend, catching up on discussion forums and blogs and trying not to get frustrated than neither blogger nor wordpress seems to want to allow me to comment anywhere today. So, sorry to those whose blogs I read regularly - I honestly have been attempting to comment recently but I'm sure it'll all start working again soon.

It's now eight o'clock and I think I'm going to go and rustle up some more toast. The first batch was just with butter. The second was one slice with butter and the other with a French terrine (goose and something, I've forgotten now but it's delicious, a small jar bought from a shop that has unfortunately since closed down). I think I'll go with tomatoes and basil for this next lot. Perhaps I'll even have a bit of salad on the side. And then, well, then I might watch some of the I, Claudius DVDs that my sister loaned me during the summer before having an early night. It has been a singularly unproductive day but I have needed it and the fact that I'm actually feeling tired enough (but not in the grumpy, headachey, overtired way you might expect) to contemplate sleeping again very soon tells me that I might have been right to have yet another day of doing almost exactly nothing. Perhaps this will be the weekend that I finally actually kick this cold to the kerb once and for all.
Posted by Moonwaves at Saturday, October 03, 2015 1 comment: