Today world leaders are meeting in Paris at the beginning of a conference on climate. You may have seen this called COP and in case you haven't had time to look it up, I did yesterday and found out that stands for Conference of Parties. Indeed. Not quite a "does exactly what it says on the tin" moment when I read that. I felt like the "c" must surely stand for climate - surely the most important conference on the most important topic in the world might mention that topic in its name? Oh well, I suppose COP is just one of the names.

Anyway, I helped out at the event held in Dusseldorf yesterday. This year, instead of a demonstration and/or march, it was more of an information event and it was held inside. And a good thing, too, as the weather was miserable and I suspect that lots of people wouldn't have ventured out to stand in the cold and rain for three hours.

There were lots of different things on offer, with lots of information on reducing your carbon footprint. And we had a couple of giant "postcards", so that people could take photos and post them to whatever social media services they use (under the #EarthToParis label). And interesting speakers, none of whom spoke for so long that anyone got bored. All in all, it was a pretty good event.


There was an article about it today in the Westdeutsche Zeitung (that's the postcard I made in that picture - I'm famous!). And now there's a short video of the event on youtube, too. Article and video in German, which very few of those who read this blog can understand but what the hell. I'm posting them for posterity. Or something.

It was great to help out at this event - part of what I wanted to do "when I have time" was to try and become a bit more active in supporting causes I believe in. And the kind of help I'm best at offering is the turn up before everyone else and set up chairs and stay after everyone else and clean up kind.

It is, however, somewhat disheartening to realise that so many people are so new to the idea of climate change or of doing anything in their own lives to change their impact on the environment. It just seems like such a long time since I became aware of things like carbon footprints (ten years ago now, because it was around the same time as I discovered blogging and in fact, blogging is the reason I found out so much at the beginning). And even before that environmental friendliness was something I thought really important and had done since I was in school. A whole lot more than ten years ago now.

I know that every individual person who makes even one small change is good. Any progress is progress. But it all feels a bit hopeless again at the moment. Our event did inspire me to try and redouble my own personal efforts, some of which I have been more lax about in the past few years. But still, it seems like we should have moved on by now from "turn off devices that are on stand-by" - how can it be that there are people who aren't aware of that? So, perhaps it's just the way of things when it comes to big crowds and humanity in general, I suppose: you end up inspired and defeatist in equal parts. Which means I'll try to forget about the defeatist clamouring in my head and go for a walk now to try and glory a bit in a nature (even if it's already dark) to swing the scales more heavily to the inspired side of things.

Finally getting around to some of those great intentions

One of the things I originally planned to do with my time off was to lose weight and get fit. Walking for an hour every day was one of the intended ways of doing that. We're 21 days into the month and yesterday was the first time I actually did it. Going well then. Hooray for goals.

Today, however, is the second time so that something of a start at least. I even convinced myself to walk past the television tower (my original goal) and continue down to the end of the little park beside it and back again before taking a short break. 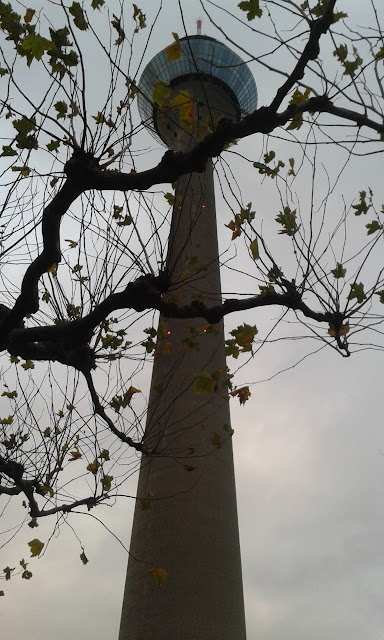 So here I sit, taking just long enough to snap a quick picture and post. Because it's 5° and five, no, six minutes is more than long enough of a break!

posted from Bloggeroid
Posted by Moonwaves at Saturday, November 21, 2015 No comments: Links to this post

Some of the good about being home all day

Being able to cook lunch by heating up some leftover rice, a couple of "curry in a hurry" disks, throwing in some green beans for good measure and topping the lot with fish fingers. 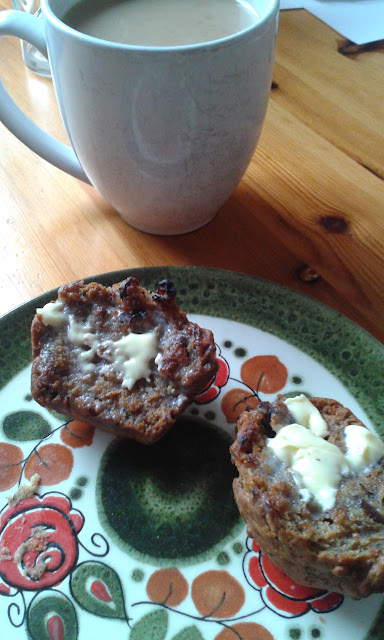 And while rummaging in the freezer discovering that there are two half-muffins from that time in August when you made a big batch of Jack in a Pinch's vegan banana muffins. Slathering them in butter makes them less vegan but perfect for a grey November afternoon.

Posted by Moonwaves at Thursday, November 19, 2015 No comments: Links to this post

Weird thing to say on a Monday morning, perhaps, but since I'm now entering my third week of not working, I really thought I'd have more of a feeling of being relaxed and raring to go. As it is, I feel more like it's still just the weekend and I'm not quite there yet. I worked ridiculous hours in my last two weeks and that, on top of the preceding seven years, will obviously require more than just a couple of days to recover from.

I had really wanted to just spend a couple of weeks doing nothing but between choir (we had two concerts this past weekend and extra rehearsal the weekend before) and translating (did a couple of pro bono jobs but also had some paying work), not to mention housework (turns out, when you're at home most of the day, everything gets dirtier much quicker, who woulda thunk it?), I've only really managed one full day of nothing. And it was lovely. I read all day long.

I'm not complaining really because all of the stuff I mention above is stuff I would normally have been trying to fit around working a full day as well. So, even if I have had things keeping me busier than I really wanted these first few weeks, I've also had time every day to eat proper meals, read for a couple of hours and catch up on some phone calls. Blogging has fallen by the wayside though. I just don't have enough time to read and there's nearly too much going on in my head for me to be able to get it all down on paper. I'm sure I'll get back to it properly though. I just need to get into a routine again. For now, though, I need to get to work. I've just received an email from a publisher asking me to send them details of my conditions in order to see whether they'd add me to their pool of translators. No idea how to go about that - I'm still very bad at the don't want to oversell and miss out/don't want to undersell and end up working for peanuts debate currently raging in my head.
Posted by Moonwaves at Monday, November 16, 2015 No comments: Links to this post

It's a bit crude and crass but it definitely made me laugh out loud when I stumbled across the Bellamy Brothers singing Jalapenos this morning.

Posted by Moonwaves at Tuesday, November 03, 2015 No comments: Links to this post