Just in case anyone might be interested, the marvellously talented Jane over at That Curious Love of Green is hosting a creativity bootcamp for the month of October. I'm not joining in as my October is already more full than I can manage (and I don't do FB either :) ) but I'm going to consider doing my own mini-bootcamp in a couple of months. Still, I thought some of you might be interested in joining in and there's still a day to sign-up (that FB group will be public until tomorrow and then made private with just those who have signed up) so off you go. And if you want to check out Jane's ambitious plans for her month, click on over to this post.

Would love to hear if anyone decides to join in. I have found Jane's blog really inspiring and I think a month-long creativity challenge is an excellent idea.
Posted by Moonwaves at Wednesday, September 30, 2015 3 comments: Links to this post

Moving on slowly but surely

After wrecking my head for a few weeks with trying to figure out websites, domain registration, hosting and all of that, this evening I finally made a step forward. Two really. I have registered the two website names that I wanted (one simply my name, one with a translations focus) and I've signed up for hosting. A few people suggested self-hosting but from what I've read about it, it would be beyond my current capabilities and I simply don't have the time (or inclination) to do that at the moment. The five euro a month charge for hosting will be more than worth it to me. A web developer friend has offered to build me a website at a substantially reduced rate but that will have to wait until the business has made enough money to cover the cost. Until then I'll figure out something very basic with my contact information and that will do. The main thing will be getting the email set up. Once I've done that, I will go ahead and order business cards. And that will be more than enough outgoings for one month.

So things are slowly moving forward. I got a rush job in from a contact who runs a translation agency late last Monday and stayed up very late doing that. Need to meet him soon to confirm rates and payment but it was a good opportunity as it was a new client for him and if they were happy with this job, they would be moving all of this particular business to him. And he, in turn, would give me the largest part of that work. I'd be happy with that. I approached him at an event during the summer to see about getting some work and offered to do a test translation for him. He phoned me a few weeks ago to see if I could do a short legal paragraph, again at short notice. I offered to get it done during my lunch break that day and did so. When we met a few days later and he said we should talk about money, I told him the first one could be free so long as he gave me a second one. So that piece of cheekiness seems to have worked out so far. We'll see how it goes. Working for an agency doesn't generally pay well at all and working directly for clients would pay nearly double what most agencies offer but starting out it's certainly an easier way to build up experience.

I'm now also registered with the national association of translators and listed in their directory, which will hopefully bring in work, too. Side-business seems to be officially up and running.
Posted by Moonwaves at Monday, September 28, 2015 3 comments: Links to this post

Just on the off-chance that one of my readers does this kind of thing or knows someone who does (and in the hopes this doesn't end up with me being spammed). I'm getting my sideline of translating up and going and about to order business cards and register a website. All terribly grown-up, yikes!

Anyway, it has got me thinking about the question of logos. And I have no idea how much getting one of those designed costs. I'm not terribly convinced it'd be a good value way to spend money, based on the kind of small side-business I'll have but it wouldn't hurt to gather some information and even pricing options. So, if anyone knows anyone who does that kind of thing or does it themselves, let me know.
Posted by Moonwaves at Monday, September 14, 2015 2 comments: Links to this post

Where I was and where I am

I'm finding it partially very therapeutic and partially almost painful to read through old posts. Have only read the first few months of this blog for now. In many ways, I have come a long way since I started all this. But, in many other ways, I'm dismayed to have not come further and, in some cases, to have stayed exactly where i was or even gone backwards. I'm taking some small comfort from the fact that I am about to make a huge change (job - all very uncharted territory until I get a new one but getting closer to quitting day now). Today is my sister's second anniversary and it doesn't seem possible that it has been two years already. I still miss her just as much and go through periods where it doesn't seem possible to feel that much pain and keep going. But of course you do keep going and it passes on again until the next time I find myself thinking "must give A. a ring and tell her about that" or something similar.

At any rate, I do want to continue on with going through some of the old lists I printed to see where I was then and where I am now so here's an update (in red) on one very old list:

Just to keep a record, some of the prices of what I've bought today: 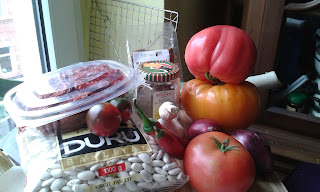 Posted by Moonwaves at Saturday, September 12, 2015 No comments: Links to this post

Things I learned from my first flea-market experience


Posted by Moonwaves at Wednesday, September 09, 2015 2 comments: Links to this post

Well, it all ended up being a rush and a hassle in the end. Perhaps a better mood overall might have helped me react a bit better to several irritations but at least it's all over and done with now. On the morning, although it wasn't due to start until 10, there were people coming around at eight o'clock already. So instead of a nice neat stall, with nicely folded clothes in lovely piles, I ended up with something looking more like this
Oh well. I did sell some clothes, and the women who bought them were all happy to see larger sizes for a change, since you don't necessarily always get that at a flea market. And, since I priced to sell (50c for one, €2 for five), people weren't too hesitant. I also got rid of a few other bits and pieces and some of the stuff a friend had given to me. She was going to get rid of some stuff anyway so told me I could have it to sell instead. I didn't manage to sell the hand-made lace edged white linen bed clothes that her great-aunt made in about 1860 - that was one of two things that she wanted to have money for (€50, in case anyone is interested in some antique Swiss bed linen). No-one was interested in the singing bowl either, even though she was prepared to let it go for €30 (about half what she paid for it). Apart from those two things almost everything else that wasn't sold at the end of the day didn't come home with me again though. We detoured to the charity clothes collection bank and then to a local Give Box to leave the rest of the stuff.


It was a cold and rainy day and I managed to get myself a cold over the weekend (not helped after Saturday's market by spending Sunday afternoon at an open day on the farm I get my vegetable delivery from) but all in all, I did come out with some money. Not a huge amount, but enough to tear a couple of rings off my paper chain.

All up, it came out to €28.10 profit. I paid €25 for the table and €20 for a deposit. Got the deposit back and made enough to cover the cost of the table and €28.10 was on top of that. So, €60 gone to savings and the rest into my purse, since I needed money anyway. I raided my 50c tin (which isn't actually sealed) for change for a float so that money also went back into the tin. I am thinking of cashing all of that in to add to my savings, though. It was intended to be the start of a moving fund but making sure I have enough money to cover a month off work is more important now, I think.

So, I've had two days at home to try and shake off this cold because I decided trying to drag myself into work and letting it drag on for weeks would be counter-productive. I haven't been able to do much so I still need to get all of the clothes I'm keeping back into the wardrobe but I have managed to get the stuff I had put to one side into the washing machine with some dye, which means I have refreshed a few things back to being wearable for another little while.
The tiniest of babysteps but it's something at least.

Posted by Moonwaves at Tuesday, September 08, 2015 No comments: Links to this post

The mess always gets worse before it gets better

At least, hopefully, it will get better eventually. I have a stand at a local flea market tomorrow and am kind of regretting now that I said I'd do it, as I haven't done the slowly but surely gathering of stuff over three or four weeks that I had planned on. A ridiculously bad mood has been plaguing me since my last post and I've totally lost my good eating, cooking, exercising and keeping things going mojo. Well, I have mostly managed to keep on top of the washing-up, only leaving things lying once or twice for a day.

Throw in an upgrade to Windows 10, a resulting/coincidental issue with my anti-virus followed by an hour or two searching the web for a solution and an incredibly frustrating 45 minutes interacting/trying to interact with Microsoft's online tech support during which I managed to burn the white beans that were going to form the basis of my first healthy lunch for two weeks, not to mention leave me leftovers for tomorrow, and, well, bad mood all over again today.

But I'm trying to get through some stuff at least and trying to be as ruthless as possible in deciding what to get rid of. So a lot of clothes that have survived previous purges are on the pile - even some that actually would fit in to the KonMari standard of "does it bring you joy". 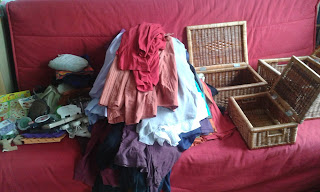 A lot more are staying, many that don't actually fit at the moment but once again I was faced with the fact that I have quite a lot of good quality clothes, better quality than is sometimes available these days and, the last two weeks notwithstanding, I am losing weight and will be able to use them again soon enough. Still, I have a fairly big pile going and more to sort through so it's something at least.
Posted by Moonwaves at Friday, September 04, 2015 4 comments: Links to this post