I'm running a bit ragged trying to keep up with everything and kind of losing the battle. Partly in reaction to that, I'm trying to do things that should make things a bit easier. Although I'm not sure if they really will or if I just want to feel like I'm doing something to make things a bit easier. At any rate, last week I ordered myself a weekly veg box from a local organic farm. I placed the order online and they phoned me the next day to check if there was anything I didn't want. I couldn't think of anything to say except peppers (can't eat) and cucumbers (don't eat). They don't just sell their own produce and do buy in from other places - although everything is organic, I don't know that it's really all local so I've chosen the regional box (cost ca. €13 per week) plus 6 eggs. And on the phone, I made sure that she knew that the whole regional aspect was what was most important to me. The delivery cost is €1.50, although if I can persuade other people in my building to order as well, that cost is shared among everyone. There's also a €6 deposit on the crate that it comes in. 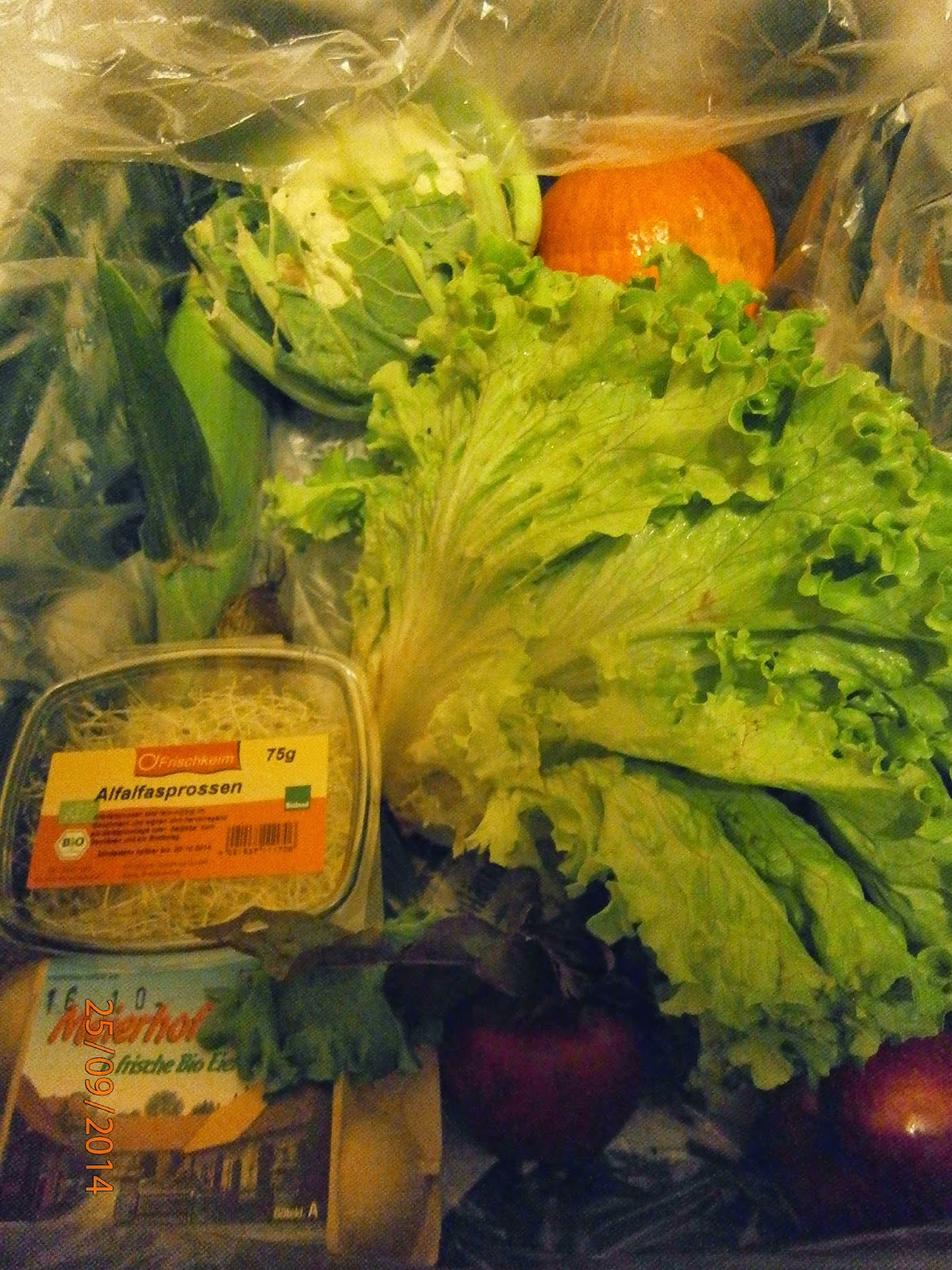 First delivery was this morning, it didn't arrive until after I had left for work but my friend who owns a shop in the bottom of my building agreed to take it in for me and all I had to do was pick it up from the bike shed when I got home this evening.

Will need to phone them and strike sprouts off the list of things to send me. I do eat them but not that much and if I want to, I can just sprout a few seeds myself. Apart from sprouts being one of the things there have been serious food scares about in recent years (and if memory serves correctly it was organic sprouts in particular), it's more plastic packaging that I just don't need.


I'm also dithering a bit on the eggs. While still from my state they are pushing the boundaries of local as far as I'm concerned. Googlemaps tells me that the village they come from is 164km from my house and that 100 miles, the somewhat arbitrary but generally accepted locavore standard, is 160km, The farmers at my local farmers' market must come from within an 80km distance of the market, so I know I have a 'more local' option available to me. And there is of course the added mileage of the eggs being delivered to the farm that does the deliveries, which is another nearly 20km further away and then back again to me on delivery day.

There are a couple of reasons I decided to give a veg box delivery a try.


If I start having to go to the market just for eggs then I'm defeating the purpose of saving myself time and stress on Saturday mornings. And possibly also leaving myself open to the temptation of buying stuff I don't really need. So I'll have to really think about it before deciding what to do.

All in all though, I'm pretty happy with what I got. I'm not a huge fan of fennel but I think I'll cut it up very small and use it for a pasta sauce of some kind. Corn on the cob is always good, as is pumpkin. Jack Monroe had a lovely recipe for cauliflower pasanda in the paper the other day that I'd love to try and I also have potatoes and have been wanting to do the Smitten Kitchen's spiced potato and cauliflower again, too, so using up that cauliflower won't be a problem. And the salad will be used up in wraps and such for lunches. I'll need to do a bit of a marathon cooking session at the weekend though, as I'm very, very busy for the next ten days or so and just won't have much time for cooking and will need to just have stuff prepared and ready to be heated up as much as possible.

And, just to prove that it really is all organic, I even got the token slug along with my delivery 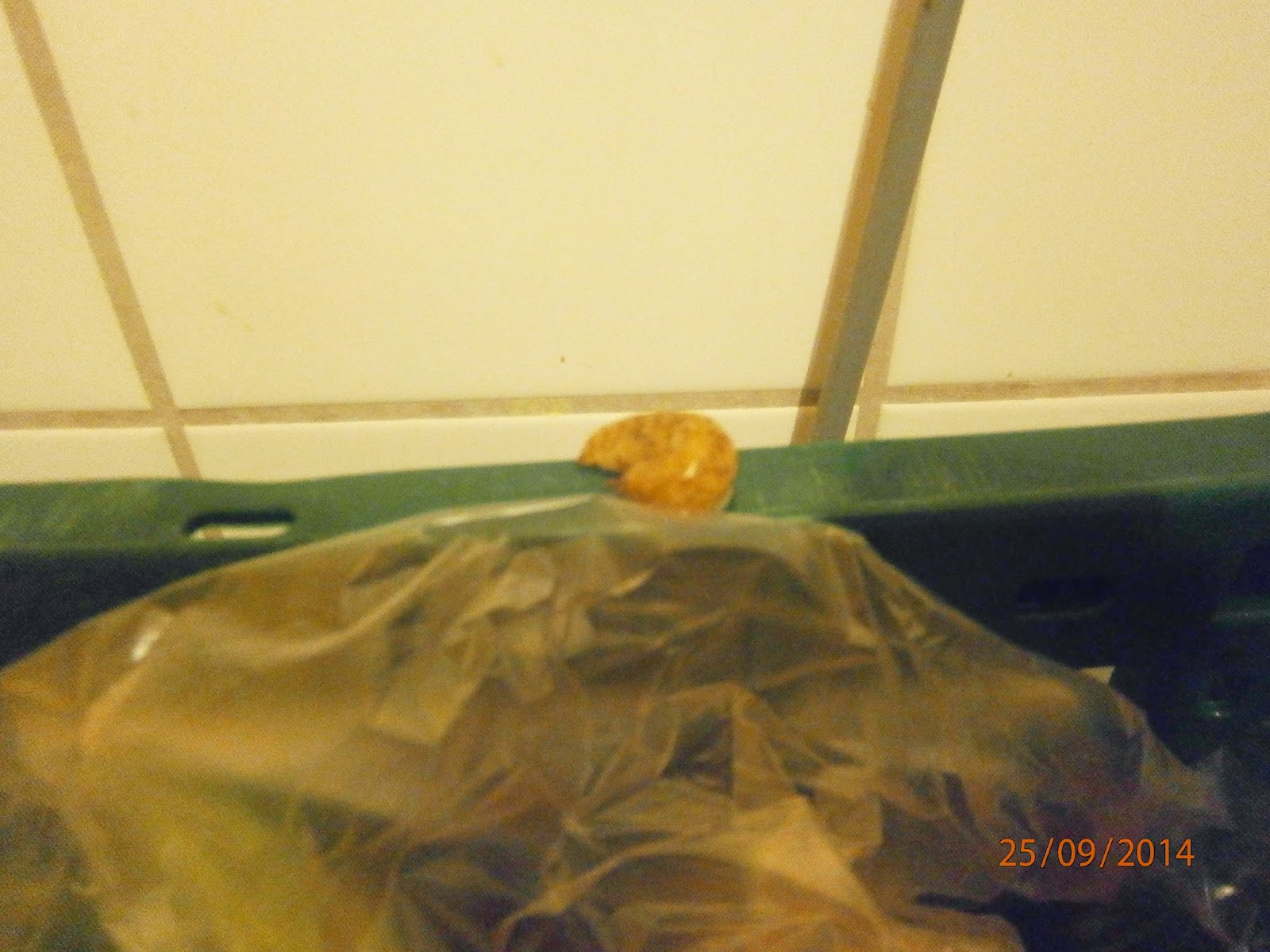 P.S. A couple of bloggers have started a funding campaign to help Phelan, the lovely and tenacious Homesteading Neophyte, who will never ask for help for herself. See framboise manor for more details, or go straight to the gofundme page. The aim is to raise enough for them to get connected up to the power grid before winter hits but Phelan blogged yesterday about the pipe of her woodstove exploding unexpectedly so any additional money over and above the original goal of $1,000 will be just as much appreciated and put to just as good use. If you have even a couple of euro/dollars/choose your currency to spare, please consider donating something.
Posted by Moonwaves at Thursday, September 25, 2014 1 comment: Links to this post

Back at the end of May I posted my first net worth update and I was curious to see if there had been any improvement. I still don't quite have a routine or method for this down and I think it'll take me the guts of a year to really be able to see exactly what's what. That accounts for the fact that, according to my spreadsheet, my net worth has gone up by just over 12.5% in just over three months. About 3% of that is due to my starting the new pension plan with work. I don't know how to figure that one out exactly yet so for now I'm just counting what I've paid in - when I do get a statement (I think at the end of the calendar year) I'll have to do an adjustment to take account of fees and what not. Hopefully they'll also point me in the direction of an online tool that will allow me to check balances on a regular basis.

I wasn't able to check my Irish retirement bond so just left the value of that the same for now. I logged in to the website for my German Riesterrente for the first time and I think there is definitely something off there, as the total was substantially higher than my last statement (which I received in January). Again, I think perhaps when I get the next statement at the end of the year I'll see all the fees having been deducted and that I'm just not seeing that at the moment - especially since the difference I'm seeing is more than €400 more than the amount I have actually paid in to that pension so far this year! Next time I go to visit my friends in Frankfurt I might bring some stuff with me and try and go through it with them. My friend's husband is a pretty savvy investor and good with that kind of stuff.

I did however, all by myself, realise that I was making a mistake in my spreadsheet. Or at least I think I was. I was calculating the percentage by dividing the amount of the change by the total value. But I was taking the total current value and I think actually I should be looking at the amount of the change as a percentage of what the previous total value was. Does that sound about right? Would love to hear from anyone who also calculates the percentage increase of their net worth and how you figure that out. Maths has never really been my strong point.
Posted by Moonwaves at Monday, September 15, 2014 1 comment: Links to this post

Frugal Paragon did a post a while back about fixing the worn inseam of a pair of jeans. Since I am also, to borrow her phrase, not a woman who is plagued with thigh-gap, I am all to familiar with this issue. A few years ago, I decided to try out one of the many tailors to be found all over in Germany.
The problem wasn't just a worn seam, but that the material had actually worn right through. Since it's hard enough to get a pair of trousers to fit me and these were about the only nice, non-work, light trousers I had for the summer, it seemed worth the chance that a professional could do something. And I was amazed at just what is possible when you know what you're doing. Such a simple fix but I'm light years away from ever being able to do it myself. All he does is place a piece of material over the area that needs to be fixed and then sew lots and lots of lines to fix it in place.


And that's it. You can barely see it from the outside. Easy enough with black, I suppose but he really does match up the colours so well, too.

Since then I've had a couple of other pairs of trousers repaired in the same way and nowadays I try to be a bit more pro-active with the whole thing, paying more attention to my clothes in an attempt to get them fixed preemptively where possible. With that in mind, a few months ago I put a pair of black work trousers into a bag, meaning to take them to my lovely local tailor as the material had started to ball on the inside leg and I could see it was wearing though. True to my usual style I then left that bag sitting for a couple of months until my favourite trousers, combat-style very lightweight summer trousers that I bought in Australia when I was there developed a rip. I didn't think they were quite at that stage but they were nearly at the end of a second summer of heavy wearing so fair enough. I am thrilled that I got these trousers done actually, because starting to cycle a bit more means there's even more wear and tear on that part of the legs so having them already reinforced is great.
I love being able to extend the life of my clothes like this - cheaper than buying new trousers (if I could even find nicely fitting ones) and less waste. It was only a few weeks ago but I'm ashamed to admit I've already forgotten how much I paid for this. It's in or around ten euro per pair of trousers, I think, possibly a bit less. I don't have a problem paying professionals to do a good job though and am very happy to support a family business like this one.
Posted by Moonwaves at Friday, September 05, 2014 No comments: Links to this post