I'm thinking of buying a pair of Crocs shoes but trawling through their website to find out a bit more about them wasn't really able to find out what they're made of. So, I've sent them off the following query:

After hearing about Crocs on a blog I read last year I've been thinking about saving for a pair. Then they became available in Dublin airport and it turns out they're not as pricey as I thought and they come in way more colours than I realised. I was however, under the impression that they were made out of 100% natural rubber but reading your FAQs see that is not true. However, I'm still not too clear on what exactly Croslite™ proprietary Closed Cell Resin (PCCR) material is. Could you elaborate, please?

I'm particularly concerned with the eco impact of every aspect of my life and so before deciding whether to go ahead and buy or not, would prefer to be in full possesion of all the facts about them. I'm not saying I won't buy them if I find out they have a high carbon footprint (hate that expression but hey, it's the buzzword du jour so why not) but I prefer to be aware of all aspects of what I'm buying.

So, my most important question is what exactly Croslite™ proprietary Closed Cell Resin (PCCR) material is. Second, where are they made? Finally, do they wear out (presumably at some stage they will) and if so, can they be repaired, if not, how are they best disposed of.

Thanks for your help.

I've very tempted to buy a pair as they do seem from the testimonials to be good for plantar fasciitis and heelspurs. Would be interested to hear from anyone using these, particularly any less than glowing reports as so far I haven't really been able to find anyone who wears them who isn't totally in love with them.
Posted by Moonwaves at Tuesday, March 25, 2008 3 comments: Links to this post

A few photos from this weekend.

First, somewhat prosaic but none the less beautiful for that. 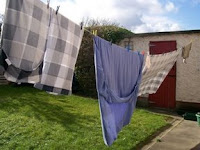 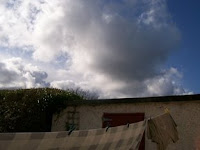 I actually managed to wash these bedclothes and get them out on the line and they were mostly dry just over an hour later, just slightly damp around some of the edges. It was a wonderful spring day, breezy but with glorious sunshine and blue skies. I did take them in just after taking this photo though as about one minute later, this appeared: 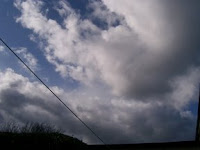 Better safe than sorry and I was glad I had brought them in as the rain fell on and off through the afternoon building up to a big storm last night. I normally try to rotate by bedclothes a bit but once these had finished drying inside on the back of a chair I just put them straight back on the bed. Just love the smell of fresh air in bed.


Otherwise this weekend I spent most of my time knitting. It's my last class this Tuesday and so I wanted to be finished so that I can spend that last class putting it all together and learning tips for finishing. Here's where I am now: 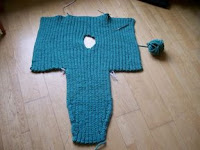 I've also knit the neckband (on the bus into work this morning) so this evening I just need to finish the other arm. I've got a much better handle on the rib at this stage though so it shouldn't take as long as the first one did. Hopefully I haven't just jinxed myself by saying that. Despite having made it a couple of inches longer in the back and the front than given in the pattern it still feels a bit short to me but I'm hoping that once it's all sewn together and I'm actually wearing it, the weight will drag the rib down a bit rather than being as springy as it is at the moment.

And finally, the bread I made yesterday as well. 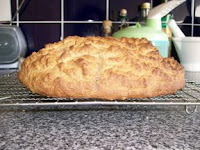 Not quite the small cake of soda bread I intended (this is about twice the size it would normally be) but close enough. I had no ordinary wholemeal flower left so used wholegrain spelt flour instead. 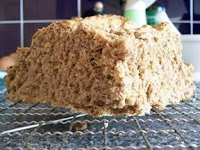 I was also a bit generous with the liquid, I think spelt just takes a bit longer to absorb or something so I thought it was dry and added some extra water (didn't have enough buttermilk left) which then left me with a much too wet mixture. Decided to just bung it in the oven and see what happened and got what might be the nicest bread I've made for a while. It could probably have done with a few more minutes in the oven as it's a touch doughy in the middle but it makes the best toast I've had for a long time.

I also found some phalcelia seeds left over from last year and sowed a good lot down at the back of the garden in the shady spot where very little else will grow. At least we might attract a few more bees in with it. 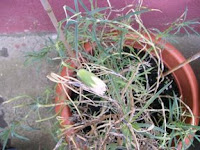 And, to my surprise, I found this growing from a plant I thought might have finished already. I didn't think carnations flowered more than a year or two and since this is technically this plant's third year and, since it is only March (carnations are supposed to flower July to September) I wasn't expecting to see a flower. Smells divine though.
Posted by Moonwaves at Monday, March 10, 2008 4 comments: Links to this post

The weeks and days are flying away from me again. Every year it seems to be more and more true what they say about time passing more quickly as you get older. I can't believe it's St Patricks day on Monday week. A friend is getting married on the Saturday of the bank holiday weekend and it doesn't seem possible that it has arrived so quickly.

I have made some progress on my jumper though, which is good. I'm hoping to spend most of this weekend working on it and would love to have it nearly finished for our class next Tuesday, which is the final one. I have really enjoyed the class and learned a lot but mostly gained a lot of confidence. Here's where I am so far: 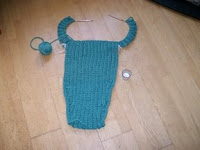 This is the first sleeve and first inch or so of the back and front (for a bit of perspective I put a little tea light candle in a glass holder beside it). I made the sleeve about two inches longer than in the pattern and have also made the back and front eight stiches longer each. This was the great thing about the class I've done - learning that I don't need to slavishly follow the pattern measurements and giving me the confidence to decide, no that won't fit me, I'll knit a bit more.

I have to knit 8 inches more to get to where it starts to separate for the neck, then knit around the neck opening and then pick up those stitches again to knit the other side as far as the sleeve and then decreasing to knit that.
Posted by Moonwaves at Friday, March 07, 2008 No comments: Links to this post