So glad to live a local type life - but seriously need to get fit!

Really seriously need to start walking more again. I was fairly good at walking home from work once or twice a week over the few months before christmas but haven't done it as much since then (what with being sick and taking ages to shake off the cold, then the bronchitis). It takes me about 35-40 minutes so it's really not a very long walk (a bit more than 2.5 km and add in some time for waiting at traffic lights).

Yesterday and today there have been strikes here so there were no trams or trains running and only one or two buses. So, up early to walk to work yesterday and that was kind of pleasant. The weather, at least, has been great - bright and not raining but cool enough to make walking really nice. Then yesterday evening was the big walk as I needed to get to choir, which is a bit further away (about 5.3km) - managed that, although my feet were starting to hurt a bit by the end of the hour and fifteen minutes it took me. No blisters but I do need to get new orthotics I think. So that left me feeling pretty good about myself, even if I was a bit stiff and very glad that someone offered me a lift home afterwards.

This morning was a bit of a different story though. The walk into work wasn't quite so pleasant - I was really tired and it didn't take long for my feet to start feeling a bit sore again. I was able to get a bus to the evening class I go to so then all I had to do was get home after that. It's about 3 km and I decided to just take it slowly. It occurred to me about halfway home that if zombies started to chase me I wouldn't have an ounce of extra to even make a token effort to get away. I'm shattered and it took me nearly 50 minutes to get home - I even took my shoes off before walking up the stairs to my apartment, just couldn't stand the thought of having shoes on for one second longer than I had to.

I need to try and keep it up now after such an enforced good start, though. Won't walk tomorrow but I'm thinking of bringing my togs into work with me so that I can head for a swim straight after work tomorrow. Then next week, I'll see about walking in a few mornings too. Need to do it now as often as possible before the weather gets too hot to make it feasible.
Posted by Moonwaves at Thursday, March 27, 2014 2 comments: Links to this post

Freaked out by debt - but is that a bad thing?

I thought when payday came around this month I'd be heaving a big sigh of relief. The last two months have seen quite a few biggish expenses so I haven't been able to send very much to clearing the overdraft on my Irish bank account. That meant I was eagerly anticipating being able to knock a big chunk off it this month, as I have no large anticipated expenses in April. Got paid today, transferred a very big chunk of change and, thanks to the new SEPA (single European payment area) systems that finally seem to be working properly, it even hit my Irish bank account by the end of the afternoon.

But you know what? Even though I am pleased to see the total on that overdraft coming down, I am not feeling at all relaxed about it. I'm very close to clearing my overdraft, with this payment I'm well away from the 2,000 mark, even if I haven't quite managed to break the 1,000 yet. And I feel just as freaked out as I did last week. So although I know it's getting there and I'd kind of like to be feeling a bit more comfortable at the moment, I actually think it may be a good thing that I'm not. I feel like I've finally gotten to that stage when any debt is just unacceptable.  Long may the feeling last because it might be the only thing that stops be ever doing it again!

Being patient is difficult but I just have to try and have another month of keeping my head down and just getting on with things. It'll be easter towards the end of April, which means a nice four-day weekend. I have a couple of social things planned but none of them are particularly expensive. There'll be a meal for book club but I'll do what I did last time and not have any alcohol to drink and try and order something cheap from the menu - not every single meal out has to be a three-course extravaganza. Myself and a friend finally made it to the table quiz in the Irish pub last Sunday evening, which was a lot of fun. We plan on going again in a couple of weeks but at 10 euro per team plus whatever you drink, that can be a very cheap night out, too. And I plan to start making full use of the ArtCard that I bought. It cost 54 euro and gives me entrance to just about all of the museums and art galleries in town for a whole year. Along with the lengthening of the days, I should have plenty to keep me occupied. I shouldn't be wishing my life away but I just really want to get to the end of April as quickly as possible so that I can finally see my debt dip into the hundreds. But best of all at the moment for me is the fact that I've booked a Tupperware party at the end of May. I am ridiculously excited about that - it has been so long since I've had one, I'd say at least 7 or 8 years. Oh how I do love my Tupperware. Sigh.
Posted by Moonwaves at Wednesday, March 26, 2014 3 comments: Links to this post

I bought a butternut squash before going to Halle in February and then didn't do anything with it since I ended up getting sick. Since I finally feel like I can't possibly put off getting back to eating and cooking properly (helped enourmously by going to a friend's for dinner last night for two delicious vegetarian dishes from the Ottolenghi book) I took the herby quark I bought at the same time and put into the freezer back out yesterday to defrost. I actually starting the day feeling like I was going to have another unproductive day but when I went into the kitchen just before one to get myself a very late bowl of cornflakes for breakfast I ended up turning on the oven, preparing the butternut squash and putting it in to cook. I actually hadn't found the recipe for lasagne again yet so forgot that they just saute the butternut squash in cubes - still, roasted with garlic and a red onion gives me just about the same, cooked squash that doesn't even need any more mashing or pureeing to use it in the recipe. The recipe doesn't call for it to be mixed with cheese or quark either - I think I was just mixing it up with the stuffed butternut squash recipe I often do. And hey, garlicky, herby, creamy butternut squash has to work at least as well as just mashed butternut, don't you think?

Since it's now cooked I thought I'd better just find the recipe and check I remembered it quickly. And of course I had completely forgotten about the white sauce part of things. No problem to whip up a quick white sauce though, right? I even have milk, not always a guaranteed thing. The one thing I don't have, however, is flour. I ran out in February and have completely forgotten to get some more in. So frustrating. So I could upset my day's planning to try and get out now to find a small shop open on a Sunday (there's a general Sunday shopping ban here for most instances, only touristy things are allowed open except for a couple of times a year - small tobacco selling type kiosks can open sometimes, too and some of them stock some basic groceries, too). Or just try it without the white sauce and sprinkle a bit more cheese between each layer. Decisions, decisions, decisions.

Edited to add the photo I had forgotten I took: 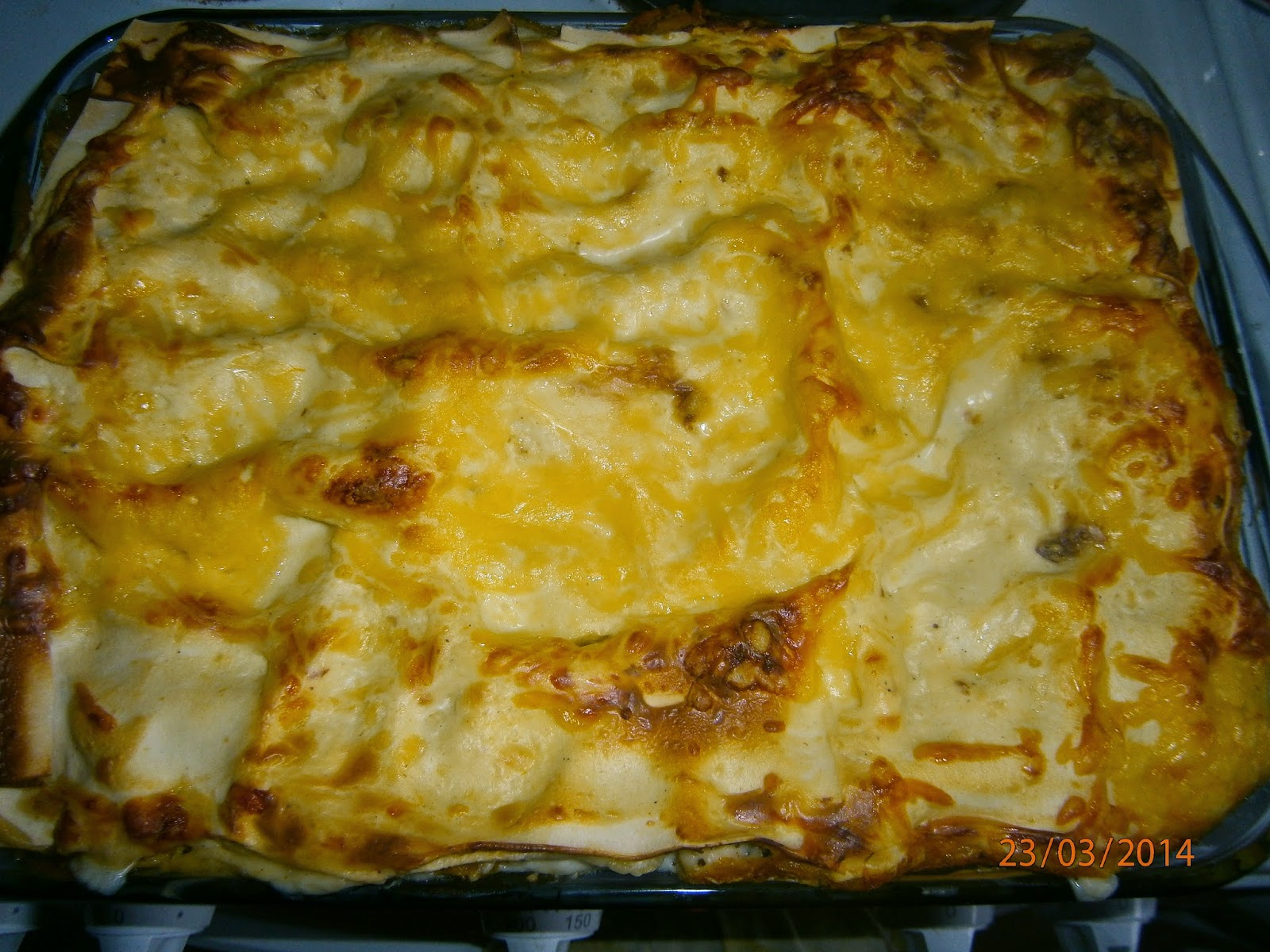 How can I be happy?

Nice video narrated by Stephen Fry - just getting in before the end of this International Day of Happiness!

Posted by Moonwaves at Thursday, March 20, 2014 No comments: Links to this post

I'm still not completely better, this cough won't go away and I have very little energy. I think that partly comes from the slight shortness of breath - I can't really do anything normal, even walking up the stairs leaves me far more winded than it usually would.

Nonetheless, I feel the need for a fresh start. Today was a holiday here so despite a busy start to the weekend, with dinner at a friends on Friday (tastiest duck I have ever eaten, from Silver Hills Farms) and then a lie-in on Saturday followed by a beer-tasting with some people from choir in the afternoon which turned into sitting around chatting until after eleven, I still had two days with nothing planned. I gave myself a day in bed yesterday, only moving to the couch in the late afternoon and was going to get some stuff done today. And then today I decided the rest was more important than getting stuff done. And I am very glad to have had another day of taking it easy. It makes the possibility of a new start seem more realistic now somehow.

So, small steps to start with. I did the washing up. The last load of washing in just out of the machine and hung to dry. And I made a pastryless quiche for dinner, which is really pretty good. I've started reading some weight loss blogs and following a WeightWatchers thread on an Irish discussion forum, which is really helping to focus my mind a bit more and get me on track again. Normally being sick throws me really off when it comes to healthy eating but this time round hasn't been so bad as I almost completely lost my appetite. Very strange for me and it has come back but still isn't quite what it usually is. I'm trying to look on the bright side and appreciate it for now because it's not just healthy food I'm not in the mood for, it's junk, too. Gotta take your silver linings where you find them!