Actually it was a kind of boring, kind of stressful day in work but this evening was nice. Choir practice and the guy who sits behind me became the first person to ask me if I had lost weight. I don't generally like people commenting on my looks too much but sometimes someone can say something simple in such a way that really does boost motivation for keeping going.

I also phoned a self-storage place today to try and get an idea of prices in Germany. At the moment a unit between 4 and 6 sqm cost about 100 euro a month to hire so that's 1,200 to start off my list of things to save for if I want to take a year off work. The price could easily change in the next three years but at least I have an idea. It's low enough that it makes more sense to put everything in storage rather than trying to sell everything and then needing to buy again when I come back I think.

I'd like to buy a map of the world to put up on my sitting room wall. I've meant to do this for a while but thinking of travelling gives me even more reason to get one. I don't think I'll go too far from home but I would like to try the following at least:

France (if I decide to travel for a full year then I will try to spend half of that time in France, it's about bloody time I learned to speak it properly. Ideally I'd like to wwoof in areas I haven't been before at the beginning and then possibly somewhere near where my sister lives for a month or two).

Italy (apart from one day in Venice I've never been)

Siberia (have always wanted to go there)

Of course this all makes it seems like I need to spend a lot of time learning languages in the next couple of years but I think I might just forget about Italian and Spanish other than picking up a phrase book before actually going there. I can say please and thank you, which are the important things. I did French in school and have done various evening courses over the years but never really got very far and just need to actually be living there and speaking it I think. I can manage if I'm on my own and absolutely have to and I need a few months of that really. And I suppose I could drag out the Russian books and start learning the alphabet again as well. Maybe I could actually open 1001 Russian Verbs this time round!
Posted by Moonwaves at Wednesday, September 30, 2009 2 comments: Links to this post

At the moment the pressure of debt is driving me a bit mad and, as these things often go, making me want to spend, spend, spend. It occurred to me today that if I have a goal in mind (other than the admittedly very nice but nonetheless somehow kind of intangible seeming goal of being debt free) perhaps it might make it easier for me to wrap my head around still needing to pay off my loan for another nearly two years. I was thinking six months or a year off work would be nice. So, for my 38th birthday (goodness gracious, I'm getting rather old!) I am aiming for having no debt and enough money saved to pay rent (or storage) for six months or a year and for me to go off and travel the world. Two years to clear loan and a little bit more than a year to save after that. In that time I will also work on losing weight and getting fit. Apart from all the other really good reasons for doing that, smaller clothes take up less space and if I'm going to be living out of a rucksack that is going to be very important. Of course I've told my sister I will try to save enough to go and visit her in New Zealand next year so will have to see if I manage that. I think if I had actually saved enough to go to New Zealand next year I'd be tempted to just keep it towards a much longer trip in a couple of years. But on the other hand sometimes you've just got to go for it and do things. Who knows if she'd even still be living there then.

I also feel hopelessly inadequate for the kind of life I want to be leading and am really feeling the pressure of not knowing how to do stuff. I'm learning all the time and have done so many things in the last few years that I wouldn't even have dreamed about doing beforehand that I know it can be done but I just feel like time is slipping by and I'm not really going where I want to be. So, if I had a long time to travel I would mostly do so by WWOOFing, I think. That way I could also get a bit more first-hand knowledge of lots of things I might not otherwise get to experience.

Mostly, a lot of the time, I just think I need a boyfriend. This boyfriend would of course be wonderfully talented and able to teach me lots of the things I want to do but wouldn't, obviously, ever make me feel like he was better than me just 'cos he could actually do all that stuff already and better than me.

Sigh. I wrote most of that about a week ago and most of it still applies although following the harvest thanks celebration I attended at the weekend I have allowed myself to feel proud of what I have achieved this summer (even if a good part of what I achieved was simply mistakes to learn from - I try to look on it from the point of view that I'd never have learned anything if I hadn't made mistakes). I know I still have so much to learn but although it is going more slowly than I feel like it should, it's going at about the level I can handle and that's okay.

I need to be very careful with money for the next couple of months though and really, really need to get my arse in gear and do my tax return. Which should take care of the credit card bill which has crept up on me again. I am also due to get a bonus in work in a couple of months time and have already decided that that money will go towards buying a proper cooker rather than into a savings account with a view to clearing my loan faster. I have a fixed rate loan so would be penalised for making extra payments off it and although I do want to start working on building up savings so that by the time I have the last six months of it to pay off, I will have enough to cover those payments already in savings, I also need to balance that desire with the other things which I need. And after having been hampered to a certain extent in this year's preserving efforts by the lack of a proper cooker, it has moved up the priorities list somewhat.

On a positive note, after a good start to weight watchers, I had a few weeks where I stayed the same and then was up and then didn't make it to class at all but I went back again yesterday and I was a bit more down than I had put up so overall I'm now 4.3 kilos (that's almost 9.5 lbs) down since 13 August. I've worn my jeans twice now (although they are uncomfortable after eating a big meal and the real test will be how well they fit after washing!) and need to put elastic into my work trousers because they are falling down and I only have one pair in the next size down and need something to keep me going until I get past that. If I need to I will buy a new pair of trousers but I'd rather try and wait another few weeks and be able to use something I already have. I've been enjoying making some soups this past week too, which I've been having for dinner when the evenings are a bit cooler but am still able to eat plenty of fresh tomatoes for lunch as well. It's a good food time of year.
Posted by Moonwaves at Tuesday, September 29, 2009 No comments: Links to this post

I went to a harvest thanks ceremony type thing on Saturday evening. I've posted about it here so won't repeat it all here again. But I do want to post the photos of the presents I gave and received on the evening here.

This is what I made. 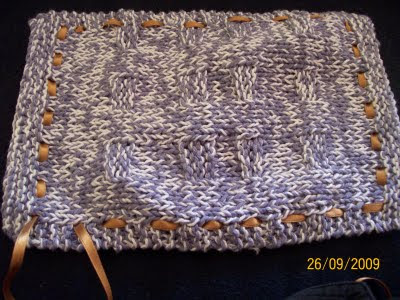 It's a dishcloth which I also used as the wrapping for a few tealights. The colour doesn't come out here but it's white and lilac rather than the kind of grey colour it looks like in the photo. I used a clashing colour ribbon so that it might be more obvious that it wasn't actually supposed to be a bag, even if I had it all trussed up like one. 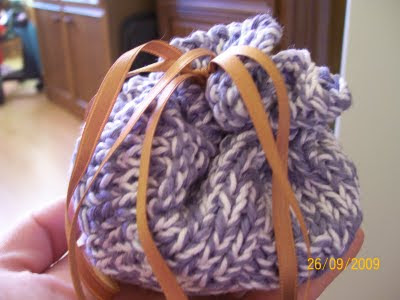 And this is what I received. 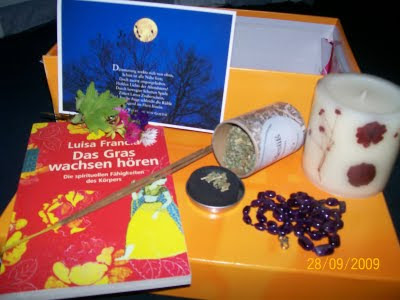 The incense stuff to burn on the charcoal yoke is something called meadow wort.
Posted by Moonwaves at Monday, September 28, 2009 No comments: Links to this post