Let's start with a random photo taken with my phone this week: 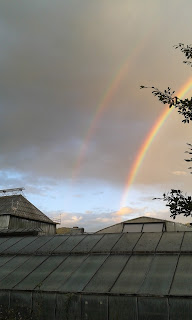 When I walked out of work on Monday, there was a perfect double rainbow arching right across the sky. Here's just a tiny bit of it. It was too big for a photo so I tried (and failed) to take a video. Oh well. To be honest I was too giddy just looking at it to be faffing around with my phone at the same time. Rainbows, to me, are just magical and will always bring a small to me face. I will quite often also end up laughing. Whatever the autumnal light is doing these days, it seems to be happening all over. I saw so many photos on blogs and instragram this week of rainbows, most of the double ones.

This evening I am:
Reading
I've moved on to book eight of S.M. Stirling's Emberverse/Change series, The Tears of the Sun. I decided to read Dies the Fire again on a whim a couple of months ago and, even though it does get a bit wearing to read them all one after the other, those cliffhangers get to me and by the end of one book I'm so caught up in the story, I just want to start the next.
Listening
It's fairly quiet here at the moment. I do have the windows open so I can hear the music from the local wine festival and funfair that's happening in my town this weekend. It's distant enough to not be annoying though.
Watching
Nothing yet but I have sat down with the intention of finding something on Netflix to watch in a few minutes. Preferably something a bit mindless. I was in the library working all afternoon, only got home half an hour ago and despite having a lot to do, I really need an hour of just switched off.
Cooking/baking
Not a thing. I grabbed a Hungarian sausage at the booth on the edge of the festival after I got off the tram and ate that while walking home. One of the things I should be doing is washing salad, though, to make sure that I have easy lunches to grab during the week.
Happy I accomplished this week
Got one translation job done fairly quickly and submitted on time. Spent two days at a congress for work and actually managed to network with people I do not know at all. And, after only procrastinating a little bit, have made a good start on the massive translation I have to finish over the next three weeks. I'll need to spend at least an hour or two every day on it, as well as more time than that over the weekends but it's great to have gotten started. I didn't manage to post my sister's birthday present on time but I did wrap everything and box it up. I'll bring it to the post office tomorrow and she'll get it only a couple of days late. My niece's birthday present is in the same box so she'll get her present a few days early.
Looking forward to next week
Start my new job tomorrow so am partly nervous and partly excited about how that works out. And my back training class starts up again on Tuesday.
Thinking of good things that happened this week
Went to the podologist on Friday and got my feet done. It had been way too long. Feels soooo good. And, saw a double rainbow! Also got some good news from my younger sister.
Grateful for
Having my own place to live. Even if I don't own it, it is great to not have to share with flatmates.
Posted by Moonwaves at Sunday, September 17, 2017 No comments: Links to this post

So it looks like I have a new job

Looks like Sundays are becoming my day for posting something. I'd like to get back to more regular and possibly even more interesting posting sometime but for now perhaps I'll just do a Sunday (or weekend) post to at least keep things going.

The week ended up being a bit of a whirlwind and my first day off on Tuesday ended up fulfilling absolutely no potential for relaxation. Started with an email from the organisation I won the two-year contract with containing the actual agreement (which took a while to read since it referenced lots of various paragraphs from the Civil Code and I'm the kind of person who will go looking up stuff like that), as well as the next job they have for me. Unfortunately it was a huge job and it would have been really touch and go for me to actually get it done in the time they wanted it done. Felt very bad about having to say that I would only do half, even though I know they do have a second translator on hand for just that kind of situation. But much as it would have done my budget an awful lot of good to take the whole thing on it would have meant translating for about four hours every single day for the entire month. On top of the day job, that just didn't seem sustainable. I'd have attempted it if they were really stuck but not just saying yes immediately was the sensible thing to do. Now I just need to get over my own feelings of inadequacy and fear of having disappointed or upset them (no indication of that from them whatsoever, these are entirely my own feelings/projections!). Not helped by finding out later that day that the final part of the stuff I was working on for them last week hadn't been delivered by the author on time and so they wouldn't be sending it to me for translation. So silly of me to feel like this was in any way a reflection of dissatisfaction with me or my work and yet there is always that niggly little voice in my head. Definitely something I need to work on.

Considering the phone call I received just an hour or two after having turned down half of the new translation work, however, it seems like it really was the right decision. Because that call was from the person I interviewed who I thought was not going to offer me the job as she wanted a native German speaker. Turns out that she decided that it'd be worth a try. She had spoken to my current boss and they had agreed that I could continue working for him for the time being but reducing my hours to 50% (20hrs/wk), and she would offer me a permanent position for the other 50% of my time. If, after a few months, it was working out, then I'd switch to full-time permanent working for her. If it didn't seem to be working out then we'd just say no harm, no foul and go our separate ways. However, as I would have a permanent (half-time) position going our separate ways would mean she would ensure that I moved to a different permanent position somewhere else in the university. I don't think I can get across how amazing this offer was - permanent admin positions in the educational sector here are like gold dust! So, all in all, Tuesday was not the most relaxing day one could wish for.

Wednesday started out ok and then in the afternoon came the call from my new boss, apologising profusely that she hadn't taken one section of one law into account and therefore I wouldn't be able to get a permanent contract for part-time with her. You can't mix and match and since my other contract is temporary, that's where the catch is. If she were to give me a permanent contract, my other contract would automatically also become permanent. But since the financing for my current job specifically prohibits a permanent position, that would cause a world of trouble for everyone. It's all good really, though. We'll extend my current temporary contract to cover 100% and then split the hours 50:50 between the two departments. After we know if it's working out or not, then we'll talk about switching to full-time permanent for her. So now it's partly just a matter of trust and partly a matter of just accepting that even if it doesn't work out in the new place (and even if, in that case, she decided not to help out with a move to somewhere else permanent), I won't be any worse off than I am now. And actually, I would have the advantage of having made lots of new contacts, probably among many of the higher-ups in the university, which is always useful. So, yeah, it looks like I have a new job and even sooner than I thought as it looks like they'll be able to get things sorted quickly on the paperwork side, since it's now just an extension of my current contract, rather than a new one. The next two weeks are going to be busy trying to get as much as possible done in my current job so that cutting back to 50% (from 75%) won't have too much of an impact.

For today though, I'm going to try and have a nice relaxing day, where I don't feel bad because I'm not doing any of the hundred things I should be doing at home. I did hoover on Thursday. And cleaned the bathroom and did one wash. On Friday, I brought an old office chair and a bag of rubber floor-mat yokes to the recycling/second-hard warehouse and the approx. two square feet of space that has cleared in my sitting room is fantastic. Yesterday I tackled the washing up that had built up while I was working that big job last Sunday and Monday and since then. I did the last of it this morning, along with the dishes from a lovely dinner last night. I've spent the morning reading bits and pieces on the internet while listening to a golden oldies-type show on the radio and now it's time to get up and have some lunch. And then this afternoon I'm actually going to go into town and go to the cinema. For the first time since moving here fifteen months ago. It's time.

Posted by Moonwaves at Sunday, September 03, 2017 No comments: Links to this post