As I may have mentioned, still trying to figure out this whole smartphone thing! 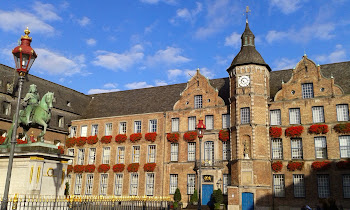 Posted by Moonwaves at Thursday, October 16, 2014 2 comments: Links to this post

Second attempt to post this. Have installed a different app since it seems blogspot won't let me switch between accounts. Or at least I can't figure out how to. Still getting used to having a smartphone.
Anyway, l have a week off now to study for my exam, which is next Wednesday. I spent yesterday mostly in bed, trying to shake the cold that started last Thursday as well as recover from a very late night after the football on Tuesday.
This morning I was up early for a therapy appointment and then went straight into town to get a few things done. So, not much studying done yet but I did get to snap this nice picture of the Rathaus (the town hall) along with the statue of good old Jan Wellem.
Posted by Moonwaves at Thursday, October 16, 2014 No comments: Links to this post

Just a quick one to make a note of how I'm getting on so far with the organic vegetable delivery. The timing was really not great and I might have been a bit to ambitious to get my first one just before financial year-end at work, not to mention two weekends full of choir activity.

I'll start with the bad. The giant head of lettuce languished in the fridge and I had to admit defeat and throw it out on Thursday evening - knowing that I was going away for the long weekend (Friday was Reunification Day and a holiday here).  The sprouts are still in the fridge and still within their best before date but I really amn't sure I'll use them. And the corn is also still just lying in the fridge - I haven't actually checked it and it might be alright, even if corn really is one of those things that tastes best eaten as fresh as possible.


Otherwise, although I'm starting to build up a bit of a surplus of vegetables, I was at least able to use up a couple of things. I decided to make the spiced cauliflower and potatoes on Tuesday evening and took some duck out of the freezer to go with it. What I hadn't planned on was working until just after ten o'clock. Still, because I had left the duck out to defrost I set to when I got home just after half-ten. I turned on the oven as soon as I got in the door and then I prepped the cauliflower and peeled potatoes in double-quick time. Finished the last potato just as the thermostat on the oven clicked off so I threw everything into a dish and put it in to roast while sat down to check a few emails. I was up early on Wednesday to help out at an event at work so did leave at my normal seven o'clock time that evening, came home and then cobbled up all the leftover cauliflower and potato. I could have easily made that much into a second meal but there was no other time I was going to be at home to eat it so it was finish it or throw it out. I grated cheese over the top of it, heated it up and it was delicious. Then I grated the rest of the block of cheese and put that into the freezer. There'll be no more cheese wasting in my house!

The pumpkin is still fine and I haven't yet used the fennel but overall I'm glad that even during what turned out to be an incredibly busy week, I managed to use some stuff.

Due to the bank holiday on Friday the delivery last week came a day early, on Wednesday. This weeks delivery had: 1 head of lettuce (a different type), 5 tiny small pears, 2 cox apples, 6 eggs, 2 kohlrabi (1 medium, 1 large), 1 head of red cabbage, 2 fennel bulbs, 7 small tomatoes and a huge bunch of parsley.

Knowing I'd be away for the weekend I forced myself to put everything away properly so instead of just sitting down after getting home from work, I spent the fifteen minutes checking and clearing out the previous week's veg and putting the new stuff into Tupperware and into the fridge. The lettuce was not in great shape, to be honest and I stripped off the outer leaves immediately. I think it's a butterhead lettuce, which I don't really like very much so I might struggle to finish it but I'm going to get up when I've posted this and wash it at least, so that it's ready to use for lunches during the week.

I gave a friend the new fennel immediately, since I'm not a huge fan and still had the previous week's one sitting in the fridge. And also gave her and another friend who happened to be there one pear each. I brought the pears away with me and ate two for breakfast on Saturday so just have one of those left. They're really delicious, even if they're not the most attractive looking pears I've ever seen. The delivery note lists them as Clapps Liebling.

Once I got home today, quite tired after the weekend away, lots of activity, late nights and a long drive home I had basically decided that I was going to go out to eat but all of that stuff was calling to me so when I spied the eggs I decided I could just do something with those. When I actually went in to the kitchen to cook something I had a brainwave and decided to do a pastryless quiche, I'd gotten mozzarella on Thursday, thinking I'd make a tomato tart but just didn't have the energy to be making pastry, easy though that may be. Only problem is that I forgot that the last times I've made pastryless quiche, I've used my small ceramic dish, and not the larger two-part metal one. And the two-part one, it turns out, isn't water-tight or liquid-proof in any way at all. All of a sudden, wondering how to use up the 15 eggs I now had on hand seemed like less of an issue and I spent more than half-an-hour trying to sop up egg from the cooker, all over the oven, the floor and just what felt like everywhere. What a mess.

I ended up managing to tip everything into a different dish and once the oven was halfway clean, I did get to make and eat what turned up to be a pretty good dish. I used up the tomatoes, the smaller kohlrabi, two leeks that have been in the fridge for well over a month at this stage and a small onion, as well as the mozzarella and all but two of the eggs (I reckon at least five or six eggs worth got sopped up and thrown down the drain). Oh well, just another reminder that trying to do new things while tired probably isn't a very good idea.

Posted by Moonwaves at Sunday, October 05, 2014 No comments: Links to this post