Nothing at all to do with simple living but I just came across this and thought it was amusing (even if it does play up lots of horrible stereotypes that normally annoy me):

Mould on soil around tomatoes

Since I potted on the tomatoes there hasn't really been any growth (8 days ago) but I assumed they would just be recovering from the transplant shock and that roots would be growing. I used a mixture of a tomato compost and soil. Today I came home to find a large amount of mould growing on the soil of two of the plants. Any ideas? 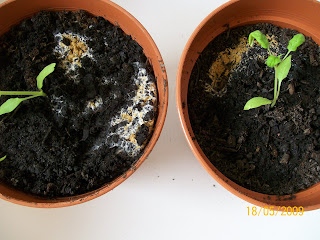 Not great pictures but I don't seem to be able to get any decent ones any more. 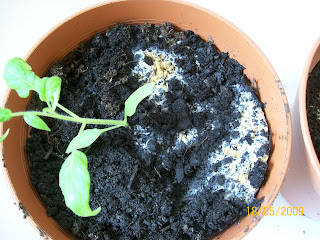 I didn't have anything to use as proper drainage so I scrunched up some newspaper and put it in the bottom of each pot. If anything I was worried this would mean I'd need to be extra careful to water enough as the paper would draw water out of the soil (which is what drainage is supposed to help with I suppose). Am hoping it might just be these two but if it's some horrible disease then presumably everything else will probably have or get it.
Posted by Moonwaves at Monday, May 18, 2009 5 comments: Links to this post

There's definitely going to be a learning curve with this whole drying malarkey. Need to cut smaller bits next time (was trying not to cut too small in case the bits shrivelled up to nothing). And should just switch it on a bit later and leave it running overnight rather than getting up in the middle of the night to check it a couple of times. Switched it off around half-five because I really needed a full two hours sleep before getting up for work and didn't thnk it needed that much more time. But it did need a bit more. So, although some bits are a bit squishy rather than dried I'm happy with the results. I didn't actually try any until I got home from work this evening but the strawberry bits taste just like jam. Fabulous. 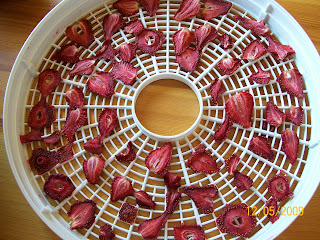 I just popped the finished product into a couple of glass jars and have them in the fridge. Will need to use them fairly quickly I think as they aren't all fully dried. Mind you, I don't think the strawberries would last long anyway. 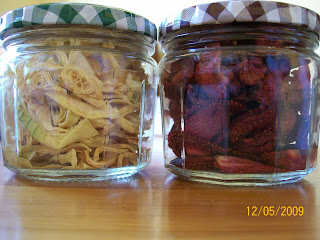 About an hour ago I switched on the dehydrator in my first attempt at drying food. Got a kilo of strawberries at the weekend but somehow only 650g have made it into the dehydrator. That's two trays full. 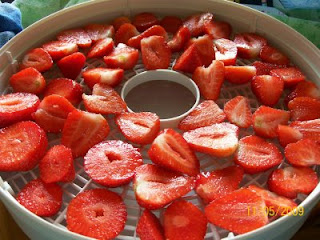 Since I had another three trays I thought I'd throw in a few onions as well. Not sure if the flavours will mix during the process or not but have put the strawberries on top in case of any dripping (thought strawberry flavoured onions sounded better than onion flavoured strawberries) and as the motor of the dehydrator is also on the top. Then again, heat rises of maybe if heat builds up the flavour from the onions will be wafting upwards. Time will tell. Googling it would probably also tell but where's the fun in that.

Yesterday I finally potted on some tomato seedlings which I really probably should have done about two weeks ago. Still have some left to do but will get to them tomorrow hopefully. The ones I did weren't root bound so I'm hoping my neglect has just slowed growth rather than complete buggering them up. I'm so late with them I even bought one already well progressed tomato plant a couple of weeks ago but then I also left that one sitting in its much too small pot. It was very root bound so we'll see if it recovers. I bought a sage plant at the same time which I also moved into a bigger pot yesterday, discovering along the way that it was actually two plants in one pot. I hate it when supermarkets to that but there's really no reason for a garden centre type place to do so.

Following a tip from Potio Appotment I have planted the seedlings nearly up to the first leaves. It should encourage more lateral root growth contributing to a more sturdy plant.

I have three bay plants growing in one big pot that also need to be potted on. They were from a supermarket plant which I got about four years ago. I painstakingly separated out each of the seven plants which were squished into the teeny tiny pot and planted them out into bigger pots. Then nothing happened. The a whole lot more nothing but they also didn't seem to be dead. Finally, two summers later, just as I was about to dump them onto the compost, one or two of them got a couple of new leaves. So I left them be and last year there were another few new leaves. They survived the move to Germany (well, I brought one pot that had three of them in it) and this year seem to be really loving the sunny windowsill in my kitchen - the biggest one has grown at least three new sets of huge leaves. My brother reports that the others which I left with him are also doing well.

And I've learned that contrary to some people's experiences, it is really, really easy to kile aloe vera plants. The plant I bought last summer seemed to be thriving and was overflowing from the pot it was in so I bought some soil that was supposed to be suitable for cactii and aloe vera and put each part into a different pot (as I had been advised to). Almost all of them are dead or dying less than four weeks later. Will have to learn a bit more about aloe vera before replacing with a new plant I think.

And here's what was for dinner this evening - summer is definitely here foodwise although the organic farmers at the market have yet to show up with any tomatoes. 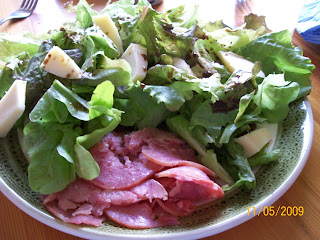 Salad leaves with some turkey salami, a few bits of bauerkaese (farmers' cheese) and a simple vinaigrette dressing. It looked like so much on the plate but it didn't last long. Who knew when I was growing up that it wasn't actually salad that I hated, just iceberg and butterhead lettuce!
Posted by Moonwaves at Monday, May 11, 2009 No comments: Links to this post 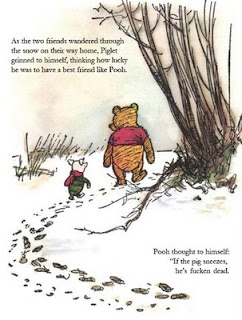 From the wonderful Hedgewizard's Diary (don"t know where he got it but it did make me laugh out loud so I thought I'd share)
Posted by Moonwaves at Saturday, May 09, 2009 No comments: Links to this post