It's well-known that moving can be one of the most stressful events in life and if I hadn't known it before, May would have proved it. Especially during the week before last, during which I had several meltdowns a day and one full-on panic attack. Let's hope that's something that doesn't happen again.

At least I did manage do get away for my week in Ireland. Up until the day before I had almost decided I'd have to cancel. It was a busy week of rushing around but I did start it with lunch with someone I especially wanted to see, followed by a float and a massage before picking my brother up to come and stay in my sister's (dinner was roast chicken, wasn't hard to tempt him). And ended very similarly, with a float followed by lunch with friends and, finally, an entire afternoon to myself. I walked along a beach and then sat on the rocks for over an hour, just doing nothing and not even particularly thinking much. 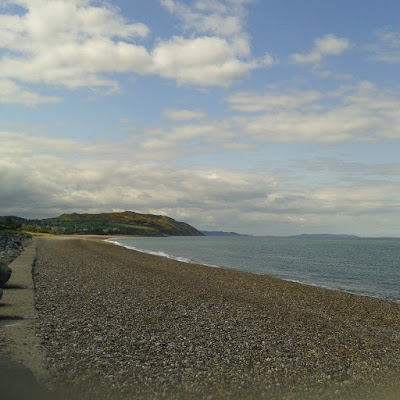 When I flew back on Tuesday evening, I ended up having to go back to Dusseldorf, as the letting agents wanted to have a pre-handover meeting to check the condition of the apartment. So I spent the morning scrubbing paint off the bathroom floor and cleaning doors and windows. It went ok so I really hope I might be able to get the handover done next week. It'd be great to just have it all done and finished with.

I came down to Heidelberg then yesterday evening and for the first time, slept in my new home. It felt good. It's a quiet area, although I seem to have a neighbour who's fond of loud music in the evenings. Once inside with the doors closed, however, you can't really hear it anymore.

I woke up very early this morning, a little disoriented as I had lowered the shutters before going to bed and it was still almost pitch dark but I didn't know if it was day or night. Nice change from constant light from outside, mind you. I might try sleeping with the shutter up tonight and see how that is.

At any rate, it was just after six when I woke and when I pulled up the shutters I got to enjoy the sunrise. Not something I often do. 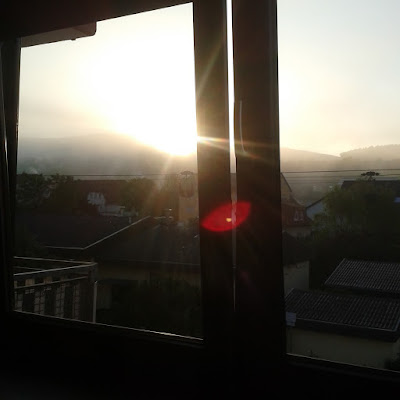 I was awake for a couple of hours, reading and enjoying the view. So happy to be back near some hills again. Eventually I dozed again and then I got up and unpacked a couple of boxes in the kitchen, read a bit more, dozed again, unpacked my suitcase. I didn't do the one thing I actually wanted to do today, which was get the WiFi and phone set up but I think I need a few days of little activity and little physical stress. I've really been pushing myself a bit too much so it's time to step back and let my mind and my body recover for a while.

I went to the lovely restaurant across the road for a delicious dinner and then had a walk after that. And now I've been sitting on my balcony, watching the last of the sunset. All in all, it has been a good day. Once I'm finished with the stress of Dusseldorf for good, I'll be very glad. I think I'm going to like living here. 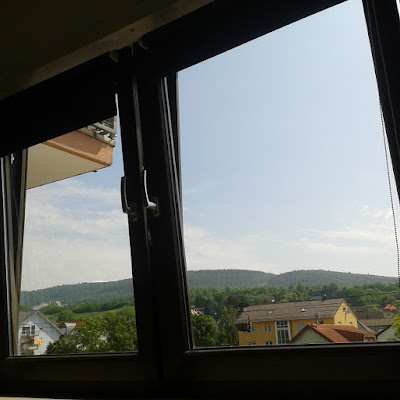 I have too much stuff

It feels like I may never be finished packing but the movers are coming tomorrow morning at eight so I have to be finished before then. I suspect I may be having another late night tonight. I'm nearly at a stage where I have one room (the bedroom) completely finished, which means I can start shifting boxes in there. That moves those boxes out of the way of the few cupboards in the sitting room that aren't quite finished yet. And then it's the bit I've been dreading, the large built in, stuffed to the gills, cupboards in the hallway. If I don't quite have the kitchen packed up it's not the end of the world as I'd be able to finish it in the morning while the movers start on everything else. Since I'm on the 4th floor and there's no lift, they'll be taking a while to get everything down. But the hall cupboards are right beside the front door so they absolutely must be emptied before they start.

I went through most of my jars at the weekend. Any of those which were just empty jars of bought foodstuffs (friends used to donate them to me, it all got a bit out of hand) have been deposited in the bottle bank. I've only kept the ones I actually bought - the glass is defintely tougher and, to be honest, most of what I want to do involves actually processing the jars in a water bath so they need to be proper canning jars. I do still have quite a lot of chutney and jams but since I didn't make any at all last year, and very little the year before, anything I do have is a few years old at this stage. Much as it pains me to do it, I'm trying to be at least a little bit ruthless and keep telling myself "new beginnings, new beginnings, new beginnings". So, I've decided to dump the contents of anything left and just bring the cleaned jars. That's work, of course, but a friend is coming over this evening to help so I think I'll set her to that task. People have been very good about offering to help but I find it very difficult to let people be at my stuff and so much has to be sorted first that it's hard to find things where I can just say "pack that, please". My poor sister was over for a few days visit, planned long before I ever knew I'd be moving so she didn't exactly have a relaxing holiday. I'm so glad she was here though, I'm not sure I'd have been able to do it without her and I'm very certain I'd be far closer to being a complete basket case if she hadn't kept me going the last few days. She left yesterday so now I just need to get finished. And when I'm in Ireland in two weeks I'll return the favour, as she'll be moving house then. No rest for the wicked...
Posted by Moonwaves at Monday, May 09, 2016 No comments: Links to this post