Can hardly believe it has been nearly three months since I posted anything. Life got a bit overwhelming for a while. Still is in a way but I'm starting to cope a bit better again. Had lots of choir practice during November and December - one concert end of November, another second week of September plus I volunteered to sing Messiah at Christmas with another choir in a town an hour away so on top of normal choir also had Monday evening rehearsals there as well as a couple of Saturdays. That meant I had no time for getting to ww but I wanted a break anyway as they changed the program and it was just all too much for me. I'm starting to get back to eating properly (again!) so I'll go back to classes by the end of February.

I'm going to try and blog every day except Wednesdays for February, even if it's just a sentence or two.

My annual household costs bill should come in soon and it will be interesting to see what the difference will be. I got loads of money back last year because I hadn't used the heating much. We have had some very cold weather this year though so I had the heating on more - leaving a couple of radiators on the lowest setting for a few weeks even to make sure they didn't freeze up. I've discovered that I'm comfy getting to sleep so long as my bedroom isn't much below 14 degrees by my thermometer and that is good to know. Also discovered that with the windows closed, even with no heating on even when it's -5 outside, the bedroom stays at around 12 or 13. Am going to start writing down the temps every day soon I think.

And I pay gas and electricity on a monthly budget scheme so I pay a fixed amount and once a year they take the readings. That should be soon as well. I got loads of money back from that last year too because I had just taken over the amounts that the previous tenant had been paying (52 euro per month). Don't know how she was managing that but my average was around 28 per month. I fixed my amount to pay 35 per month to give me a bit of leeway but it will be interesting to see how it works out this year. I've had lights since November plus the small oven I got is electric and I only started using that in January 09 so that'll show up as well. And I did a lot more preserving and cooking this year too. We'll see.

Speaking of which though... 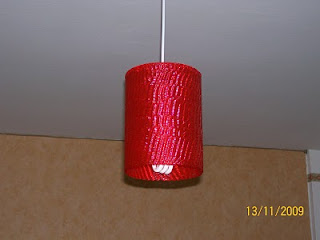 I still have the uplighter in the sitting room as well so this one has a lower wattage bulb in it and with the slight red hue it makes for quite a restful light I find. And then if I need stronger light I can use the uplighter instead. I do use the light in the bathroom at nighttime ocassionally but mostly I still don't bother. Great to have a proper light in the kitchen though. That has made a huge difference.

I moved the cupboard (which I call the tall boy, 'cos that's what it was called at home) underneath the tree out of the kitchen and into the sitting room. It still has kitchen stuff in it but it really was in the way there and I'm glad I decided to move it. It ended up being the perfect place to put the tree as well. I decided not to go for a real tree this year and just dragged out this old small one, which still looks pretty good I think. Most of my tree ornaments are too big or heavy for it though so I've had them hanging on nails and door knobs all over the place. 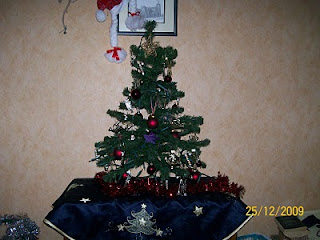 I'm thinking about painting the tall boy. Would love to think it's a priceless heirloom but it's not and I think it could look fantastic with a coat of paint. Might chicken out and just varnish it a slightly lighter shade but we'll see.

And a few final pictures. Here's a pot full of the start of a pumpkin, quince and apple chutney.

Here are a couple of shelves in my hall cupboards, which have proved very convenient for storing my preservation efforts.


Jams and above them the few jars of tomatoes left from the one small batch I did plus one jar of fruit leathers gone not-quite-right.

Now just need to make more effort to eat all of this stuff!
Posted by Moonwaves at Sunday, January 31, 2010 No comments: Links to this post