It's that time of year again, time to open up my sealed pot (see SFT's Life After Mortgage blog for other participants in this year-long challenge) and see how much my not terribly regular donations of spare change over the past year have amounted to. I thought it'd be less than last year as I kept forgetting about it to be perfectly honest. And I had no notes in this year's pot at all. I was very surprised when I lifted the pot down from it's shelf as it was far heavier than I had expected.

All of that made a nice little pile though... 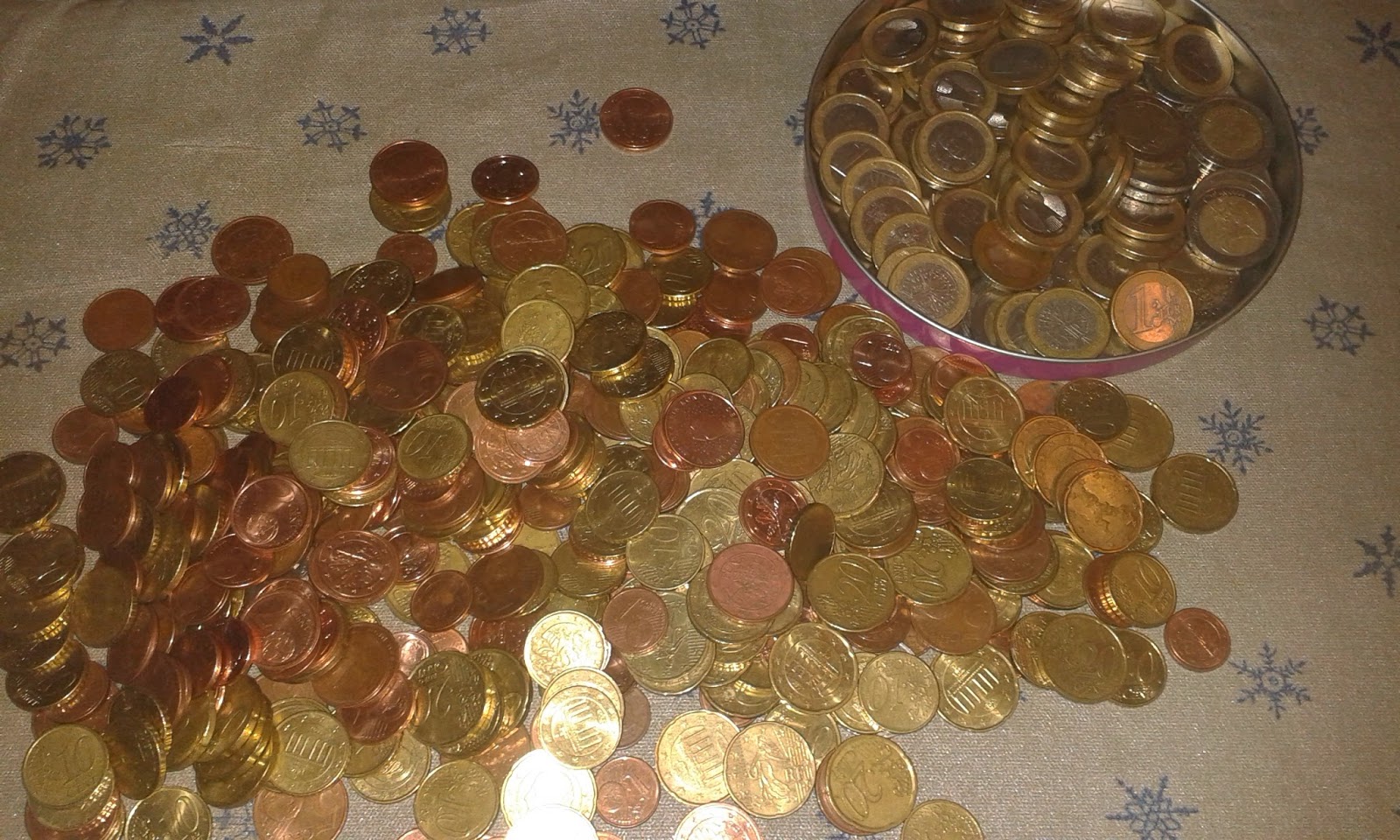 ...even better looking when it was all counted and nicely stacked up though. 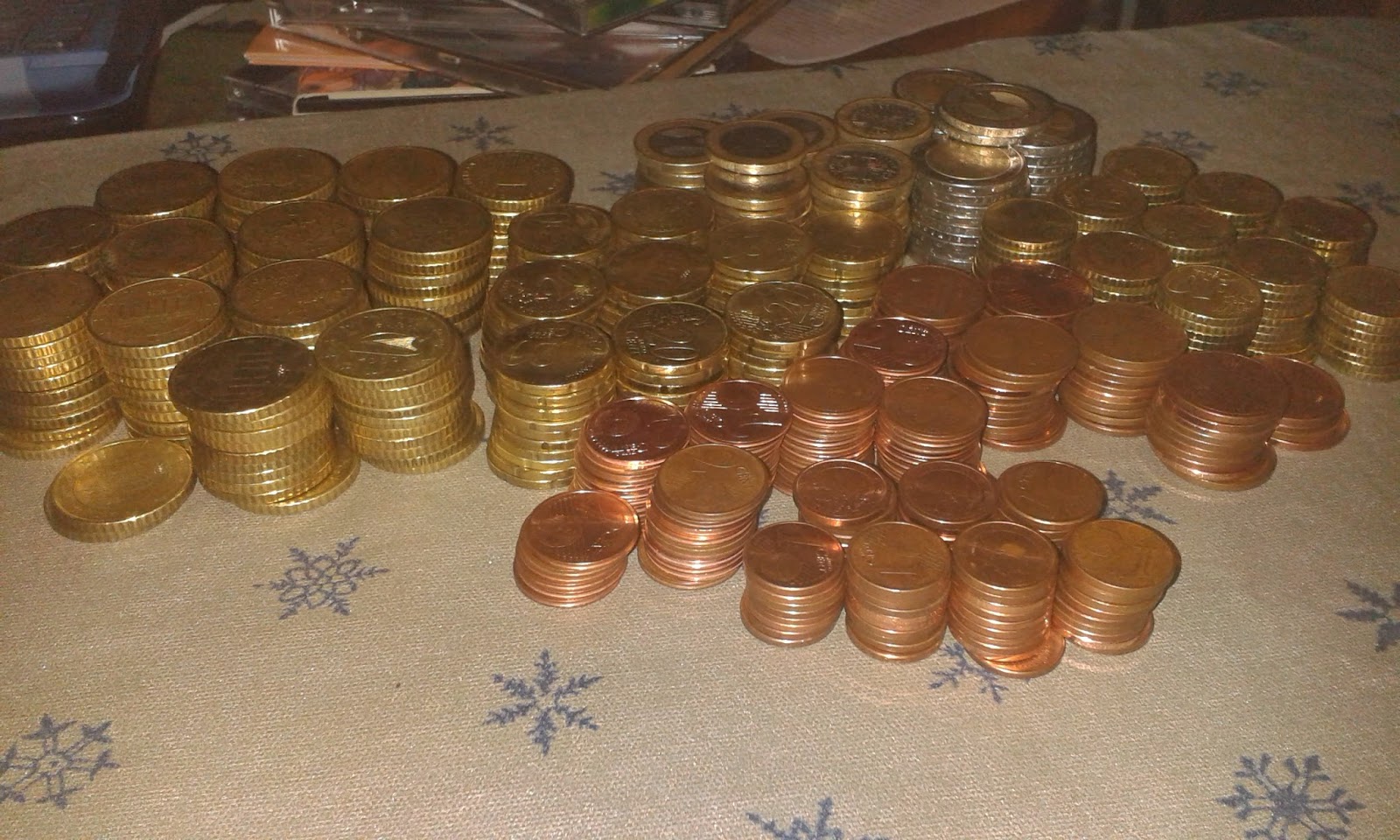 I have been saving my 50c pieces separately and they have now gone back into their money box and I'll continue putting away as many of the 50c pieces I get as possible and that money will go towards hopefully moving next year. €66 isn't bad (I miscounted at first and thought I had nearly €70, which just goes to show me that making little stacks like this is a great idea, since I'm obviously not capable of just counting coins properly). Although I didn't have any notes this year, and overall had fewer coins, I had a far larger percentage of higher denomination coins so my total, even without the 50c pot, was actually slightly higher! Hooray! Here's the breakdown: 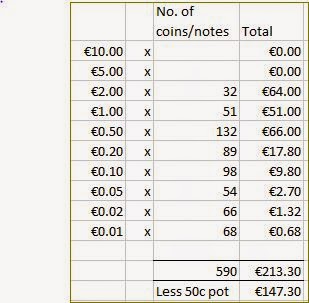 I had a lot of fun spending my sealed pot money at the National Craft and Design Fair last year and I'm looking forward to seeing whether or not I find anything nice at this year's fair. I'm flying to Dublin on Thursday after work and will be at the fair on Friday morning and possibly afternoon, before meeting up with friends and family to celebrate my 40th birthday. 40 years, my goodness how time does fly. Thanks again to Sue for hosting the Sealed Pot Challenge - it made last year's birthday lots of fun and it looks like it'll do the same again this year. I'm not feeling much of an urge to look for anything in particular though - kind of feeling like I have enough stuff at the moment. So I'll go along and enjoy looking at everything and really enjoy the feeling of knowing I have the money to get something if I want to.

My third pot from last year, by the way, was an unmitigated disaster. I don't think I managed to get more than two five euro notes into it at the same time at all, or keep anything in it for more than a few weeks. Still want to try it again next year though. And I will seal up my pot again tomorrow and off we go again. Along with my 50c pot, of course - I am really pleased with how that one went. So 50c pieces for moving and the big pot for something nice for my birthday - possibly not at the same place next year though, a lot will depend on whether or not I manage to find a new job and move next year. Watch this space.

If you'd like to join in with the Sealed Pot Challenge for 2015, head on over of SFT's blog to put your name down. See you there!

Still struggling a bit to get things under control but today has so far been a pretty good day. The first day this week that I was able to just sleep until I woke up (so that typically, even after waking and going back to sleep twice, when I was finally awake it was still only half-nine). I'm fighting a bad cough though, so really wanted to take it easy and sleep as long as possible.

I stayed in bed for a couple of hours and read a few chapters. I've done this a few times now and I think I'm going to make it my new Sunday morning routine. Wake when I'm finished sleeping and then read one chapter of each of two books. At the moment I'm reading "Das Große Los" by Meike Winnemuth - a German journalist who won half a million on Who Wants to be a Millionaire and spent a year travelling the world, living for a month  at a time in a different city. It's a lovely read and lends itself well to reading a chapter at a time. This morning I read July, which she spent in London. And when I was finished that, I picked up "Tackling Depression" by Ian Birthistle and finished reading the chapter I must have started months ago. So for the next five weeks or so, I'm going to aim to read one chapter each of those two - I'm taking the fact that I have exactly five chapters left in each of them as a sign.

After reading, I lay for a while, wondering if I might doze off again but that didn't seem to be happening and despite wanting to take it very easy, in the hopes of knocking this cough on the head before it turns into a full-on cold, I had a lot of things to do and felt more of an urge to get up and do some of them. First up, the ironing. A fried came around yesterday and very kindly put up curtain rails in my sitting room. It took hours, the rails I bought and attempted to hang years ago were not going to work, in his opinion so I just took the advice of someone far more experienced in DIY than I am and we headed off to the local DIY centre to see what we could find. Got rails, a decent ladder and some LED bulbs - my seven bulb light in the sitting room has had one bulb after another die in the last couple of months and I was just waiting for the last one to go before getting new ones. Since we were there, I went ahead and got a few - they're pricey enough (although nearly the same price as the older style energy saving ones at this stage) so I just go four and will get the rest at the end of the month. My friend, T. being far more particular about things than I am, insisted on finding some way to tighten the shades on the light as well. It hasn't particularly bothered me that they hung a bit loose but I have to admit that it does look nicer now. Anyway, after a lot of work I finally have curtains rails hanging in my sitting room. But the curtains I got a while back from another friend who was leaving town need to be ironed - I hung one, just to see what it was like and although I could put them all up, telling myself I'd iron them soon, at this stage I've waited so long than I know it's better to do the thing properly once and for all. I have a mountain of other stuff to iron as well. 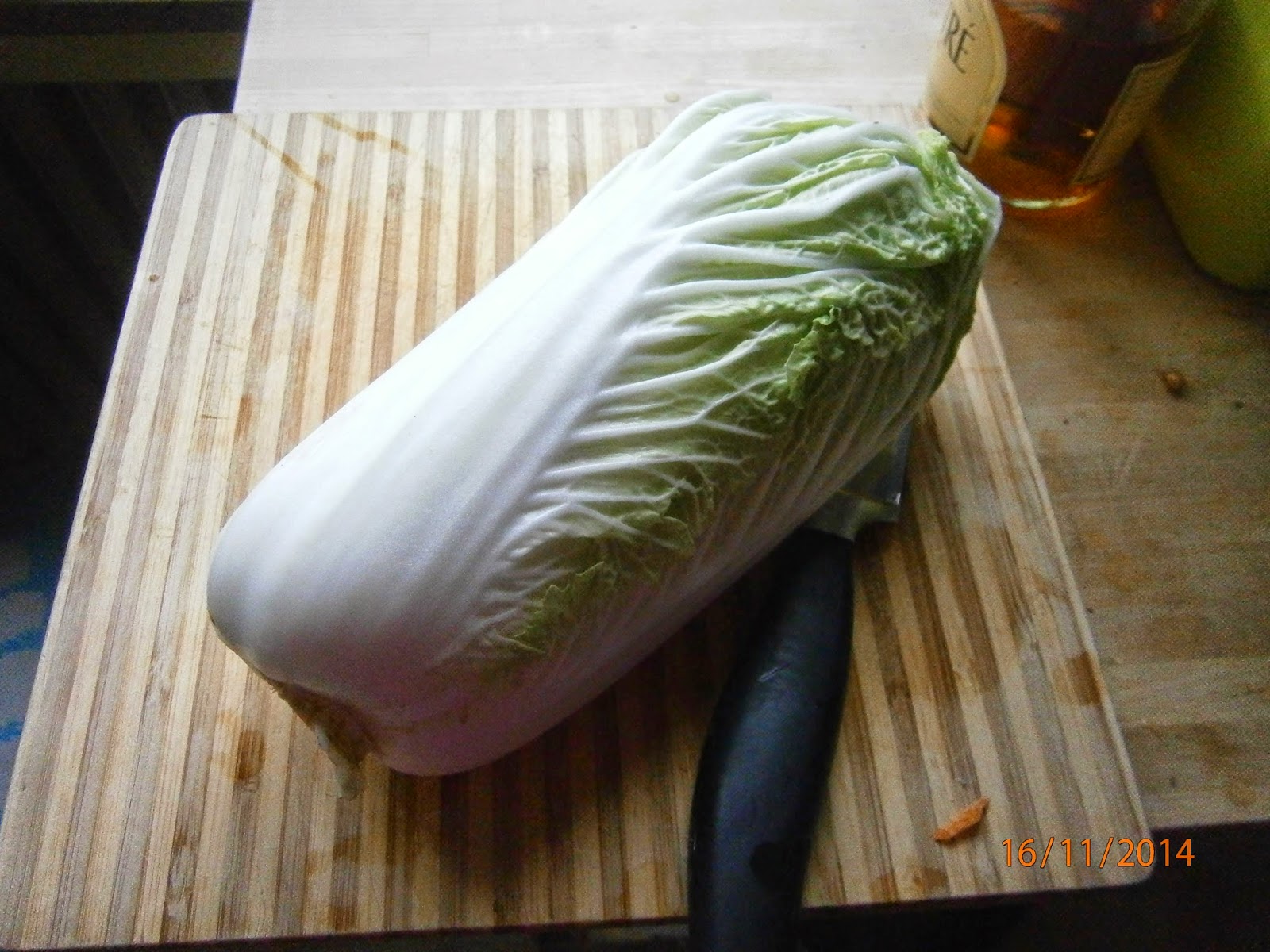 Since I had so much ironing to do I got up and immediately got stuck in to it. Or not. Nope, instead I headed into the kitchen and started doing one thing, then another and ended up spending the best part of two hours there. But, finally, I am sort of caught up on my vegetables. I have thrown out a shameful amount of food since I started getting the box delivered every week but I'm slowly getting the hang of it. So, today I used up the turnip, most of the Chinese cabbage and a couple of the carrots that were delivered this week, along with all of the potatoes I had on hand and half an onion. I've made cabbage rolls and they're just waiting now to be put into the oven when I want dinner.
I've also chopped up and sauteed two leeks that were just about on their last legs, along with the other half of the onion and some lardons. I'll use that tomorrow in a big quiche. I have a LOT of eggs to use up, too. I have a small amount of Chinese cabbage left, as well, and I'll either add that to the quiche, or keep it and make colcannon when I get my veggie box delivered on Thursday. I'd adjusted my order so that I'll just get eggs every second week now and every other week, I'll get potatoes. At the moment my fridge is looking in pretty good shape. I still have a Chinese cabbage from a couple of weeks ago, celeriac, plenty of carrots and two leeks from this week. So I'll have to have a think about all of that. I really want to do carrot and kidney bean burgers again soon. Realistically I'm not going to use the celeriac in anything other than soup, so I might make a big pot and freeze some of it perhaps. But for now, I'm happy to feel like things are coming under control, dinner's ready to go, the washing up has all been done (except the dish that the cabbage rolls are in) and I've been sat down for about an hour at this stage. That means it must be time to do the ironing!
Posted by Moonwaves at Sunday, November 16, 2014 No comments: Links to this post

Got mincemeat made, now for the cake. Cakes actually, I'm going to try and do two this year. And I briefly toyed with the idea of using the half packet of suet I have leftover to make a very small pudding but then I read the recipe - seven hours total cooking time, on top of 40 minutes prep? You must be joking. Maybe next year. For now I'm happy to have gotten the mincemeat done. By dint of using tin foil instead of the proper lids I got a double batch done so I really hope everyone will be in the mood for lots of mince pies this year. And until December, I get to enjoy having a couple of very pretty jars to look at. 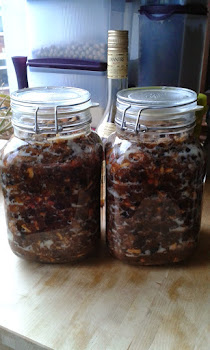 Posted by Moonwaves at Tuesday, November 11, 2014 No comments: Links to this post