This is what had me running late this morning

I decided to make the curry in a hurry paste from mortgagefreeinthree (I feel like I'm mentioning MFin3 a lot but I've been reading through the archives and there's such a lot of good stuff there) but after a barbeque in the park on Saturday afternoon I think I had a touch of heat exhaustion and so Saturday evening and then Sunday were a bit of a wash. However, the coriander I got on Thursday wasn't going to hold out much longer so I got up a bit earlier today to just get it done.

The idea is making a concentrated sauce that can be frozen in portions and then used as the base for lots and lots of different Indian curries. Browning the onions took much longer than I thought it would though and then I decided to just get the washing-up done and, well, fifteen minutes can fritter away very quickly in the morning.

This curry in a hurry is a bit brown and murky looking but the smell was absolutely fabulous. I was so excited to get my onions to finally achieve that brown from the "hard fry in the Indian style" but for once I seem to have gotten in right and had no burnt onions, just lovely dark brown meltingly gorgeous ones. Once all the ingredients were added I even managed to get the heat for the simmering just right and so I left it to do it's thing and headed up to quickly iron something to wear and have a shower. 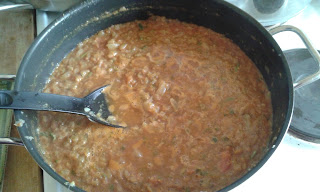 Since I had to get to work I simply transferred it into a large Tupperware container and left it in the fridge so after getting home from pilates this evening I got stuck in (the smell when I came in the door was really good but if you don't like that then this is a recipe that you'll want to make with the kitchen door firmly closed) and transferred some of the sauce into a silicon tray and got that into the freezer. The one I used is more a bun tray than a muffin one so the portions might be a bit smaller than they should be. I used a well-heaped tablespoon for each "bun" and just left one or two with slightly less heaped spoonfuls - want to see how it looks when they're frozen.
I reckon I'll have at least two or three batches of freezing to do to get it all done. So I need to really use up a couple of things from the freezer as otherwise I won't have room to keep all of my curry discs. Which means I'm hoping I'll have the energy tomorrow evening to make some banana bread (or muffins) 'cos I know there are bananas taking up space in there.

Edited to add: These froze beautifully and there wasn't as much left in the bowl as I thought so I got nine more portions out of it (21 altogether, more or less what it says in the recipe). And I've had a very healthy smoothie for breakfast which removed a small container of strawberries from the freezer, leaving me room for a ziplock bag with the already frozen ones.
Posted by Moonwaves at Monday, August 10, 2015