I was supposed to meet a friend to go for a walk this morning but as it was lashing rain we cancelled and instead I sat down to read another couple of posts from the mortgagefreeinthree blog. I'm nearly finished and honestly kind of glad because I'm starting to feel a bit stalker-ish! Great blog though and I've already tried loads of things from it - good little easy enough and don't take too long projects. I'll work up to the other stuff.

Anyway, today's first post was for a no-knead crusty loaf and since I bought flour and yeast online (convinced by Elaine's recipe for 30-minute rolls that I could possibly get back into bread baking after all without too much effort) at the beginning of the month, I decided what the hell and headed into the kitchen to whip up a quick loaf. I've been reading about no-knead bread ever since the now famous NYT article, have watched youtube videos and even got myself a cast iron saucepan a while back so it was time to just take the plunge. 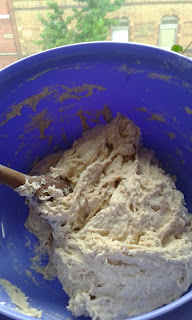 And you know what? This really is one of those it took me longer to find the scissors to open the yeast packet than it did to make the dough kind of recipes. Everything dumped into a mixing bowl and mixed together to a sticky dough. I used a trick I learned from the Mary Berry book that has the only yeast bread I've made up until now (Book People bargain years and years ago) - to get warm water of the correct temperature mix half boiling and half cold water together. The resulting water is the perfect tepid temperature to activate but not kill the yeast.

Now she does this as an overnight rise, bake in the morning kind of a loaf so I reckoned if I put it to rise at about ten o'clock in the morning then I'd have something lovely to bake this evening.


No-knead bread costs
400g bread flour = 45c
Half-teaspoon yeast (internet tells me a teaspoon is just short of 3g, so 1.5g) = 1c
300ml warm water (not digging out annual bill to figure this one out!)
1 tsp. sea salt (it's so long ago since I bought salt I have no idea anymore what it cost)


I bought that particular Tupperware mixing bowl a while back on a special offer - the idea of making yeast bread has been ruminating for a very long time!

The flour I bought was from a website called backstars.de - I'm still not sure what led me to it or even to ordering stuff online but I just had a day a few weeks ago where I thought I needed to stop messing around and just get to actually doing stuff. At any rate, I got 2.5kg bread flour, 2.5kg wheat berries, 1kg milk powder, 500g instant yeast and 4 different spices (smoked paprika (sweet), smoked paprika (spicy), juniper berries and a chili spice mix (habanero, jalapeno chipotle, smoked paprika). I used that spice mix last night for dinner actually and boy, is it spicy. I had a smallish celeriac and half a large kohrabi so chopped both into chip sized pieces, blanched the celeriac and then cooked them both in the oven, along with the turkey pieces I bought yesterday. But before it went into the oven I mixed a good glug of olive oil with a generous teaspoon of the spice. I think I'll be trying to remember to keep to using it in increments of half-teaspoons in future. Just on the edge of my tolerance and that was after I added some quark to the edge of my plate to use as a dip to take the heat off. But, it's really delicious so I'm glad I bought it. And I've found a way to eat celeriac that I don't mind, so it's all good. 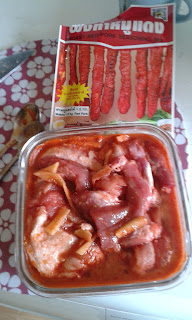 For dinner this evening I'm doing spiced cabbage and some of the pork belly I bought yesterday. My sister sent me this seasoning mix for red pork so I mixed up one packet of that with water as per the instructions, chopped up the pork into several strips, added a teaspoon of honey and some sliced fresh ginger to the marinade (just because - also discovered I have no soy sauce so have added that to my list to restock) and now the whole lot is sitting in the fridge for a few hours to marinate. And it looks, well, it looks kind of gross to be honest but I'm assured it will taste great. Marinading meat is never really the prettiest thing to look at. At least the colouring is natural (beetroot powder).

Anyway, back to the bread and now you'll see the special thing (or at least the special advertising point LOL) of my "Peng" bowl. With the lid on it is sealed up tightly and I like that as it means no need to use cling film or shower cap or any other kind of eventually disposable plastic. But it's not so tight that it won't come off and as the dough proves and rises the lid does, too, and eventually it will "ping" open. Here it is after three hours and not long before it popped open:
Since it's a no-knead, long rise loaf of bread, I've closed up the lid properly again and I'll leave it now for another few hours. But this evening, not including fuel costs (and I'll be doubling up in the oven later as I'll have the quiche to go in at the same time) my loaf of bread will be costing me say about 50c and about four minutes of my time so far. That's pretty impressive. Although, I just remembered that there was a €3.90 delivery charge - I bought eight items from backstars and it was a standard charge so just less than 50c per item if I wanted to divide it like that. Even if I allocated the entire 50c for the flour to this one loaf of bread I'm still not over €1 for the whole thing and that is a third of what I'd pay in any of my local bakeries. Really hope this is as tasty as I'm anticipating it to be!
Posted by Moonwaves at Sunday, August 16, 2015