A few years ago there was a post on clickclackgorilla about The New Escapologist, which I think was the first time I'd heard of it. I'd already read Tom Hodginkon's How to be Free and How to be Idle and was delighted to have another source of inspiration. Maybe if I had enough inspiration one day I'd actually manage to do something about that vague (and sometimes not at all vague) feeling of being trapped and thinking that life was somehow supposed to be more! At some stage I also started following their blog and so when crowdfunding for Robert Wringham's book, Escape Everything!, began, it didn't take me long to convince myself that it would be money well spent. Unbound publishers work in such a way that writers can basically pitch their ideas to the internet. The book is only printed if and when the minimum number of pledges have been made. I really like the concept and especially the fact that more of the price of the book goes to the author than in traditional publishing. A few weeks ago, my copy of Escape Everything! arrived and last week I finally got around to starting it. It was the carrot I used to make myself finish the stick that was last month's book club book.

I'm not very far into the book yet but even the small amount I've read has already given me several moments of "yes, yes, yes" (not quite Meg Ryan levels but still, definite enthusiasm). I might end up giving in and end up marking this book. Maybe if I just use a pencil and not a pen or highlighter I might feel better about it. I could always look on it as improving a skill which I currently don't really have (the ability to draw a straight line). 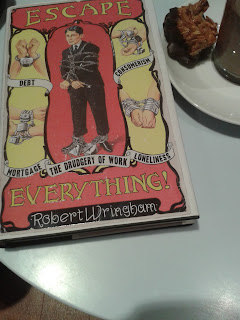 I'm still very conflicted about the struggle in my mind between wanting to escape and the need to have money. Although I've made some moves towards getting out of ordinary paid employment of the office variety, I'm not good at coping with the uncertainty of income level. There have been some parts of the book so far which at least make me feel that trying to change the environment I'm working in is at least a good step in the right direction. It's probably a very good thing I'm reading it now as I'm starting to get nervous about not having a job yet and it's a good reminder to not give up just yet.

Here are a few of the things from the book that have struck me so far. The book is still available from Unbound or also on other popular book-selling websites and presumably in bookshops. Or ask for it at your local library. Even if they don't have it, perhaps they'll consider getting it if people are asking. :-)  I'm looking forward to reading the rest of it immensely.

From the foreword (by David Cain)
Page xiii: For all the financial prosperity of the modern world, there's a certain poverty in our willingness to take pay to perform activities that have, typically, almost nothing to do with our personal values.
Page xiv: Limiting your freedom in some kind of token solidarity with the truly oppressed is like avoiding exceptional health simply because the chronically ill can't have it.

From the introduction
Page xxii: If it were possible to escape such physical shackles [it's a bit about Houdini], would it not also be possible to escape the socially constructed ones that bound millions of normal people to modern lives of alternating consumption and toil? After all, social shackles aren't even really there.

From chapter one
Page 3: When you work full time, every vacation, weekend, bank holiday, nightly sleep and stolen moment is but a recovery from work. We don't occupy those moments in their own right any more: we use them to recover from work.
Page 4: Just because I've never enjoyed a job, it does not defy belief that there might be good ones out there: well paid, altruistic, satisfying jobs with daily variations and the opportunity to do something worthwhile and well. [I know it's not quite there but this is kind of what I'm aiming for when looking for a job in a college rather than working for accountants.]
Page 10: ...I choose Escapology over utopianism. It's something I can do by myself.
Posted by Moonwaves at Monday, March 14, 2016