It's too early to say that the dark days of winter are behind us but, after someone else commented on it a couple of weeks ago, I have to admit to having taken to checking the sunset and sunrise times on a weather app I have on my phone on an almost daily basis. It is definitely helping me to know there is a minute or so more daylight today than a few days ago, for example. Even if you can't really see the difference. Still, we are almost up to five o'clock before the sun sets and I think it is also helping me to remember to look out the window and enjoy the sunset - I have a tendency to be so firmly in my little world of hibernation that I nearly forget that it isn't actually just permanently dark out. And today's sunset was really beautiful. 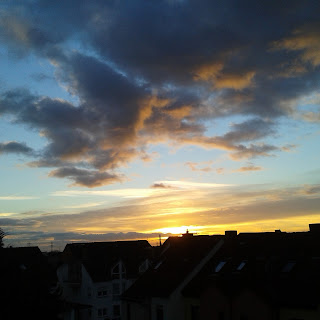 This evening I am:
Reading
Course materials for an online course I've started. I actually signed up for this a few months ago but missed the starting few days for one reason and another and decided to give up before I even started and just wait for the next time round. It started again last week and so I've spent some time going through the introductory module yesterday and today and now am reading some of the extra materials they linked to. It's all about sustainability and the green economy and so far it's very interesting. The book I'm reading at the moment is one a friend bought for me recently by Jonathan Bardon. It's called Hallelujah, the story of a musical genius and the city that brought his masterpiece to life. As you might imagine, it's about Handel and the premiere of Messiah in Dublin and I'm really enjoying it. Especially as it'll only be another few weeks before I head off to sing Messiah in Halle again.
Listening to
When I haven't been listening to lecture videos for my course I've had Beethoven on in the background (5th and 6th Symphonies in case anyone was wondering).
Watching
I finished rewatching Jericho yesterday and really enjoyed that as I realised that I never got to see the last three episodes before. It has made me want to re-read Dies the Fire again, too. And maybe World Made by Hand as well. I'm planning on watching a film this evening but haven't decided what yet.
Cooking/baking
I made a huge pot of vegetable soup earlier, so I'll have some of that for dinner. I also made and tried chia pudding for the first time today. Well, I say made but really I just put some chia seeds into a cup of milk and left them in the fridge overnight and had that for breakfast this morning. Wasn't a huge fan of it. I think I'll try just adding a few to smoothies instead.
Happy I accomplished this week
I got my bullet journal started and have even made some progress on getting some things on my to-do list done. In order to do one of those things I cleared a space in the kitchen that became a kind of dumping ground just after I moved in. Once I had that cleared I could move the stuff that was stacked on the floor. Baby steps but sometimes I need to live with a mess for quite a while before I change it. And having lived with the mess I really appreciate the new non-mess an awful lot. I also brought back some DVDs to the library on time and handed over the book that I bought for them. They have a great scheme coming up to christmas where they put up a huge poster with details of books they'd like to have and you can tear off the little tag with the details and buy the book for them. You get a donation certificate from the town hall for your tax return and a small-town library gets to improve their selection of books a little. And I'm very happy that I've managed to keep on top of the washing-up again this week. I may leave things lying but it all gets done and cleared at least once a day.
Looking forward to next week
There's a lecture on in the university tomorrow evening that I'm going to try and get to. It's about citizen's rights for minorities in Europe so should be interesting. And next Saturday I'm going to join the Heidelberg version of the global women's march. Is anyone else joining in their local march?
Thinking of good things that happened this week
It snowed on Friday evening and night and things looked picture pretty. And then it had mostly melted from the streets and paths by morning, leaving just the pretty to look at white on the distant hills and on rooftops, while allowing everyone to walk around normally without slipping or sliding. And I had some good chats with my boss on a few different topics. We also got the paperwork started for extending my hours to 30 per week from April.
Grateful for
The fact that even though we might be close to the edge, the apocalypse hasn't actually happened yet and I get to live my life in warmth and relative security. Also, chocolate. I don't think there's ever really a week where I'm not grateful for chocolate.
Posted by Moonwaves at Sunday, January 15, 2017

Two more minutes of light every day and believe me I"m counting them!