Matching plates and bowls up

I few months after I moved here, I bought a set of second-hand dishes (you can see a picture on this old post). I still love these dishes but unfortunately a collapsing shelf when the cupboard door was open a few years ago means that I have almost none of the red plates or saucers left. I think I have one plate intact and four saucers (one which has a tiny chip out of it). The bigger sideplates have the pattern on them and I have plenty of them so I just use them and only occasionally think about how nice it would be if I had some of the red. I've toyed with the idea of going to one of those paint-your-own-ceramics places and seeing if I could re-create the colour but, well, that's one of those things you think about but almost never actually do.

On the spur of the moment last night, I called into a shop down the road from me. Not a pound shop, but not a million miles off either. They sell lots of cheapo stuff and then a few more expensive things. But if you need to grab a photoframe or a plastic box for under the bed, it's the place to go. I was thinking to myself as I headed out that maybe I should buy a small bowl in an effort to encourage myself to eat more salad. I'm not a huge fan of it in winter but a small side-salad with my dinner wouldn't be too hard to incorporate into my day. Perhaps if I had a nice bowl just for the purpose? I do have the soup bowls from my dinner service but they're not a great shape and a bit too big for what I was thinking of. The few small bowls they had along the lines of what I was thinking weren't really calling to me though and none was even close to matching any of the colours I have. I used to love having a mishmash of stuff but since I got this set I do make a bit of an effort to have matching things - not sure if that's something that happens as you get older anyway. I think perhaps wanting matched or non-matching stuff is one of those things that comes and goes in phases. 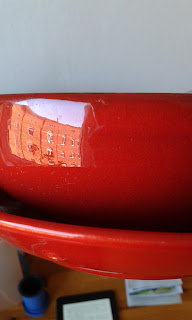 And then, just as I had decided to leave rather than spending money on something that wasn't really right, I passed the nice pottery section, where they have colourful hand-painted tagines and that kind of thing. Including, this week, a 2 for 3 special offer on the tapas dishes. I have to admit I normally walk right past this bit because gorgeous as the colours are, it's too tempting. But the big yellow signs caught my eye and then I spied some red stuff. Including some small bowls. And look: not a bad match at all, is it? It's not quite the same but close enough and, most importantly, it doesn't clash. 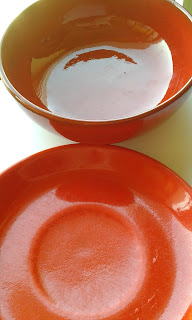 I grabbed the two small bowls that were there, added an olive dish type thing as my freebie and am happy out now. I wasn't really planning on spending money, don't have any to spare but this was totally worth it. I've been wandering in and out of the kitchen all day admiring them. More expensive than I might usually buy but for ten euro, not a reach-for-the-credit-card moment either. And although at first I hesitated because they might be too small, they're a bit deceptive so just the right size for a decent, but still small, portion of salad. And yes, I have tried it out already.

Colours are a bit strange in this photo but you can see the size of it beside the saucer, really not big at all. But big enough and I think it'll be a big help for February when I start paying closer attention to portion control.
Posted by Moonwaves at Tuesday, January 19, 2016

The match looks really good, at least in the photo (I'm sure the light is a bit different in real life.) Always feels great not to have to 'start over' and throw the rest of the set out or something like that.

I looked at the old post and was astonished that you had to provide your own kitchen sink when you moved in! That's one for the books!